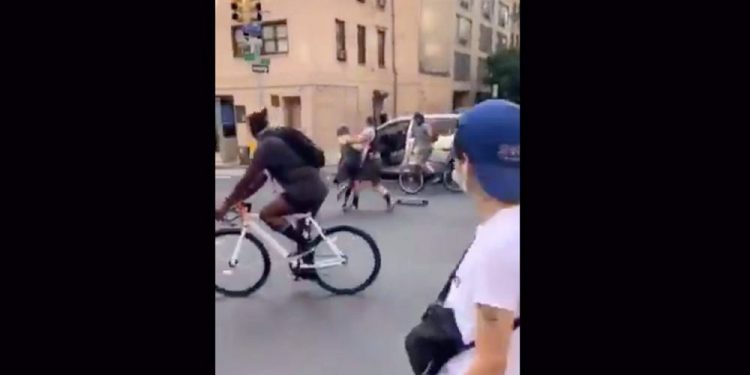 Police officers in New York have been filmed arresting a female protester by forcing her into an unmarked minivan in east Manhattan.

Footage of Tuesday’s arrest drew sharp criticism from the American Civil Liberties Union, which called the arrest “dangerous, abusive, and indefensible,” in a post on Twitter.

Congresswoman Alexandra Ocasio-Cortez said on Twitter: “There is no excuse for snatching women off the street and throwing them into unmarked vans,” calling on Americans to resist the slide into authoritarianism.

A video of the incident shows the woman, who Gothamist reported was 18-years-old, resisting before being carried into the van by police dressed in civilian clothes as uniformed police officers on bicycles surround the vehicle to allow the arrest to take place.

In a statement, the New York Police Department said that the woman, “was wanted for damaging police cameras during 5 separate criminal incidents in & around City Hall Park. The arresting officers were assaulted with rocks & bottles,” adding that unmarked police vehicles were used to “effectively locate wanted suspects.”

A spokeswoman for New York Mayor Bill de Blasio’s office referred to the statement when asked about the incident, according to the New York Times.

The woman had been protesting against the clearing of Occupy City Hall six days ago in a dawn raid by police. The encampment started forming in June following weeks of protests sparked by the death of George Floyd at the hands of Minneapolis police, AP reported. The Occupy City Hall protest was part of a national “defund the police” movement seeking to redirect funds from policing to community needs like housing and education.

The New York Times reported that, “Several city officials said on Tuesday that they were troubled by the videos of the woman’s arrest,” quoting New York City comptroller Scott M. Stringer as saying he was “deeply concerned”.

The arrest drew comparisons to clashes between police and protestors in Portland, Oregon, which have intensified in recent days following the decision by US President Donald Trump to deploy federal officers – led by border patrol agents – to the city.

Fellow councillors Carlina Rivera and Brad Lander called for an “independent review and immediate explanation for why an unmarked van full of officers was anywhere near a peaceful protest.”