‘Our dead are buried there’: Ebo logging decree sparks anger in Cameroon 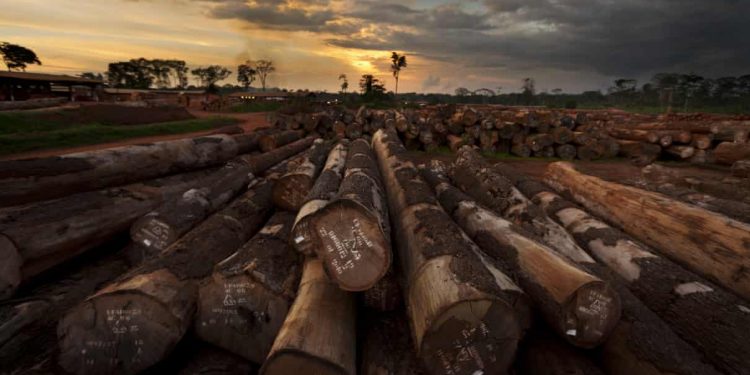 A Cameroonian government decree allowing logging in a forest that is home to some of the world’s most endangered species has sparked outrage among local communities and conservation groups.

The richly biodiverse Ebo forest is one of the last intact forests in central Africa and home to hundreds of rare flora and animal species.

On 14 July Cameroon’s prime minister, Joseph Dion Ngute, signed a decree that turned half of the forest into a so-called forest management unit, meaning logging rights could be auctioned to the highest bidder.

Locals and NGOs say the move threatens the existence of critically endangered animals including Nigeria-Cameroon chimpanzees, the rarest sub-species in Africa. These unique primates are adept at fashioning tools from stones to crack nuts, and sticks to fish for food.

It also dashes the hopes of communities who have been campaigning for the right to return to villages in the forest from which they were violently displaced decades ago.

“We have always lived in harmony with this forest and its diversity, but people just want to make money,” said Chief Victor Yetina, a ruler among the Indigenous Banen people.

The decree covers 68,000 hectares in the east of Ebo forest, which Banen people and other Indigenous groups consider their sacred ancestral home.

“Much of our history can still be found [in the forest],” Yetina said. “You can still find our cocoa plantations, even after 60 years. Our dead are buried there.”

He said his people were planning to bring legal action to try to force the government to reverse its decision.

Sylvie Djacbou, a forest campaigner at Greenpeace Africa, said logging in the forest would be a “death sentence” for endangered primates, and he urged the government to cancel the plans and designate Ebo forest as a self-managed park instead.

Cameroon is among the world’s largest exporters of timber, which it predominantly sells to China. President Paul Biya’s government, in power since 1982, has come under increasing pressure to boost the economy owing to the impact of the Covid-19 pandemic.

Yetina said the move contravened a 1994 forestry law because the government had failed to sufficiently consult affected communities or settle claims to the land before signing the decree.

Banen people were forced from the forest in 1963 as Cameroonian soldiers and guerrillas fought each other in the aftermath of independence from French colonial rule.

More than 40 villages were resettled within a strip of land about 10 miles from the forest edge. Yetina said a promise by the government of the time that they could return when the fighting ended was never honoured.

In response to mounting criticism, Cameroon’s minister for forestry and wildlife, Jules Doret Ndongo, said the government was committed to conservation in the forest, and that logging would not harm its biodiversity.

In 2006 the Cameroonian government pledged to turn Ebo forest into a national park, but this was opposed by local communities who feared their land would become state property. A minister recently complained that the government had grown tired of waiting for international donors to support the project.