Orbán backtracks on plans for Chinese university in Budapest 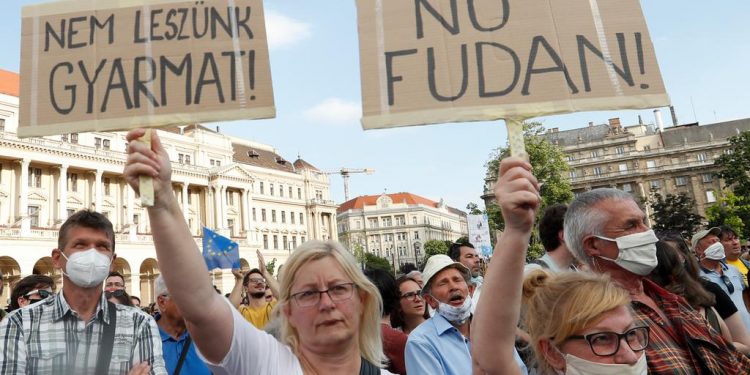 Brussels (Brussels Morning) Following a massive public protest in Budapest on Saturday, Prime Minister Viktor Orbán’s government appeared to backtrack on its plans to open a Chinese university in the Hungarian capital.

Some 10,000 protesters took to the streets on Saturday to oppose a planned development in Budapest, where the government planned to build a Chinese university campus in a location that had been set aside previously for a dormitory village for Hungarian students.

Revelations from investigative outlets further fueled the anger of Budapest citizens when it was revealed that the construction would be paid for by Hungarian taxpayers, with 1.3 billion euro out of the 1.5 billion euro expected costs being covered by a Chinese loan. Plans were also revealed that the entire campus was to be built using exclusively Chinese labour and materials.

Reacting late on Sunday, Orbán’s chief of staff Gergely Gulyas emphasised that the university was “not even at the planning phase”. He said that the final decision could be put to a referendum in 2023, once the plan takes shape, Reuters reported.

“Once the project’s conditions are known, we support a referendum in Budapest to decide whether locals want Fudan University here”, Gulyas stated.

A public opinion poll last month showed that public support for the project is very low.  Orbán’s Fidesz party also enjoys very low support in the capital, where a ruling party candidate was ousted by the liberal Gergely Karacsony, who is likely to go head-to-head against Orbán in the next parliamentary elections. Given such a political climate, the outcome of a referendum would likely be negative.

Karacsony told the protesters on Saturday that, aside from being worlds apart with the Chinese government when it comes to human rights, Budapest’s citizens really “don’t want a Chinese elite school built at the expense of Hungarian taxpayers”.

Previously, Karacsony had demonstrated his opposition to the project by dubbing streets surrounding the planned campus site with new names referencing Chinese human rights abuses. The Chinese embassy in Budapest responded to his Saturday remarks by saying “it is unseemly to criticise the internal affairs of another country”.