One Way the US Can Reassert Global Leadership 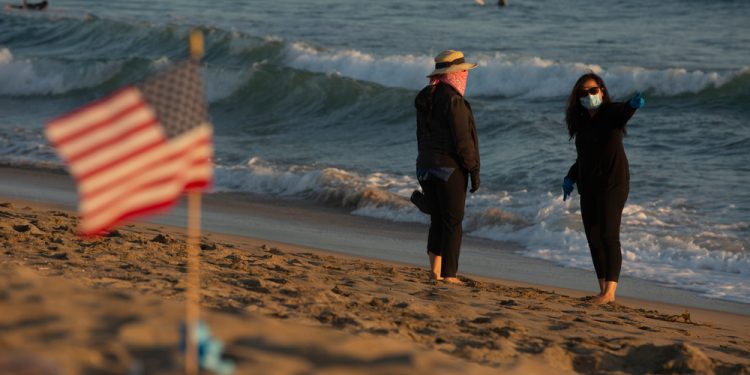 Beach goers flock to Sunset Beach despite stay at home orders due to the COVID-19 global pandemic.

New York (Brussels Morning) The catastrophic American response to the Coronavirus crisis had a devastating effect on the US as hundreds of thousands have died, the economy has been devastated and political divisions have increased.

However, there is a foreign policy component of America’s Coronavirus failure that should not be overlooked. American politicians from both parties frequently stress that the US is, and must be, a global leader bringing the world, or at least our allies, together to solve global problems.

That is exactly what did not happen during the pandemic. Instead of being on the forefront of the international public health response, the White House launched a disinformation campaign, did little to help its allies combat the disease and did the opposite of leading by example as the crisis hit the US very hard.

This has badly damaged America’s standing in the world and puts the US in a difficult position as it seeks to reassert its position of global leadership. One way the US can begin to change that is by taking the lead in helping the world gets vaccinated against Coronavirus.

The US missed the opportunity early in the pandemic to help distribute PPE and otherwise support less wealthy countries, as would have occurred if the pandemic had struck at other recent times and during other recent administrations. That failure will be forgotten almost immediately if the US is visibly helping other countries get and distribute the vaccine.

More than seventy years ago, the US invested in the Marshall Plan both because it was a way to help our allies and because it helped the US win friends in Europe.

The Marshall Plan cost roughly $13.3 billion in the middle of the last century, but the goodwill and support it bought the US was priceless. A major vaccination effort could have a similar effect and define the US in the minds of hundreds of millions of people around the world for a generation or more.

The project of vaccinating huge numbers of people in dozens of countries will be neither easy nor cheap. It will require the US to spend billions of dollars, but money alone, even massive amounts of it, will not be enough to vaccinate millions of people in Asia, the Middle East, South America and elsewhere.

The project is also an enormous logistical project that requires manufacturing, storing, shipping and distributing the vaccine. Each step of this project is fraught with unprecedented difficulties, but the stakes and potential payoff are extremely high.

Additionally, if poor countries lag months or even years behind wealthy countries with regards to the vaccinations, that will escalate tensions, continue to drag the global economy down, exacerbate anti-American sentiment and further destabilize international relations. The US can ill afford to see that happen.

This vaccination program may be too big for the US to do alone, but this creates an opportunity for meaningful US leadership on a timely and global issue. For proponents of the view that America is the only country that can lead the way in solving global problems, the entire Covid-19 crisis has been an unmitigated humiliation.

The Biden administration has one last chance to change that by forging coalitions and agreements with allied countries, foundations, NGOs and the private sector. If done right, the US can be part of, and even lead, a global public health effort with almost no precedent in human history. This, not a failedpeace deal in the Middle East, the invasion of a foreign country, or a high profile summit that accomplished nothing, can be Joe Biden’s foreign policy legacy. However, if the US is unable, unwilling or simply lacks the vision and confidence to do this, then it will be time to put the American global leadership narrative to rest.

The Biden administration will be under tremendous pressure to ensure that the American people receive the vaccine first and in a timely and efficient manner. To a great extent Biden, and the Democratic Party, fairly or not, will be evaluated on their success in that endeavor.

The US taking on the leadership of the global vaccination project, must not interfere with that, but given that how different the two projects are, it is possible to pursue both. One key issue will be manufacturing sufficient doses of the vaccine and the accessories necessary to distribute it.

That will be extremely difficult, but the US can help do that through financial incentives and making other resources available to the manufacturers of the vaccine and related products.

The political, medical, financial and logistical difficulties may be overwhelming, but global leadership is only meaningful if it helps achieve the most difficult goals. For the US, leading a massive international vaccination is a rare confluence of the national interest and the ethically right thing to do.

If the Biden administration can take this on and succeed, it will repair the damage of the Trump administration and make it clear to the rest of the world that American leadership is more than just a platitude.