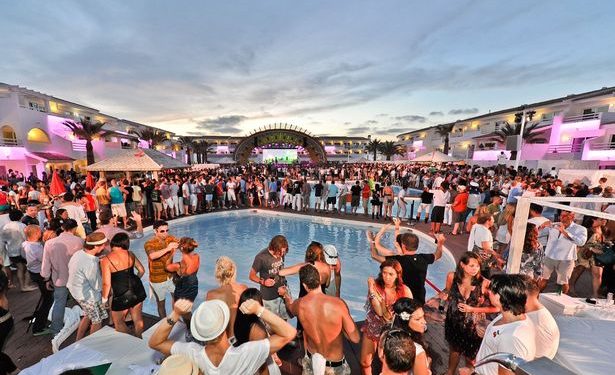 Majorca and Ibiza’s government has slapped a ban on pool parties to stop the spread of coronavirus.

Officials in the Balearic Islands have taken tough action following evidence of a strong link with coronavirus outbreaks.

Now pool parties are banned in a blow to the tourism-dependent economy, as well as party boats which were already forbidden.

President Francina Armengol announced the new measures at a press conference on August 17.

There is also a new ban on the sale of alcohol in any form of transport linked to tourism.

The measures are part of a new package of restrictions which come into effect tomorrow.

The aim is to stop large crowds gathering on boats or in premises that have a swimming pool.

The new rules apply to Majorca and Ibiza, as well as Menorca and Formentera.

It follows outrage in recent weeks following photos of crammed pool parties and boats – where revellers are not wearing masks or social distancing.

The restrictions come as part of tougher measures across Spain with pubs and restaurants having to close at 1am.

No new customers can be accepted past midnight and capacity has been slashed.

Nightclubs and cocktail bars have been closed and smoking is banned in public places where social distancing of two metres cannot be maintained.

The Balearic government tweeted this afternoon: “It is time for responsibility. We suspend nightlife, curb congestion and ban tobacco use in public spaces when the distance cannot be maintained.”

Anyone caught breaching the rules stands to be fined between €25 and €600,000 depending on the seriousness of the situation.

Prime Minister for the Balearics,  Francina Armengol said many of the measures announced by the central government last Friday had already been applied in the islands.

Other new rules include a ban on contact sports for the next 15 days when the decision will be re-evaluated.

Sports competitions that were scheduled to start on September 1st will be delayed, in principle, until October 1st.

Visits to nursing homes will be subject to new controls and the capacity of churches and other places of worship cut to 50 per cent.

All establishments will be obliged to display their opening and closing hours, capacity, obligation to maintain safety distances and the use of a mask.