Obama’s stark message: America must save itself from Trump 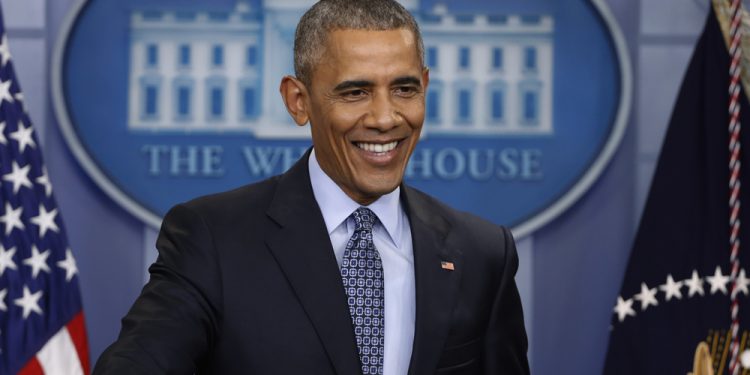 Just four years ago, amid balloons, confetti, dry ice smoke and giant TV screens, Donald Trump struck an authoritarian tone as he accepted the nomination at the Republican national convention before a frenzied crowd. It prompted warnings of the impending death of democracy, and the end of America’s gloriously chequered 244-year journey. But no one really believed it.

However, Barack Obama is now clearly taking the fall of Rome theory seriously. No former US president has criticised his successor at a party convention as he did on Wednesday night, and none has warned that his successor “will tear our democracy down if that’s what it takes to win”.

The medium matched the moment. Gone, in this pandemic era, were the roaring crowds of the 2004 convention, when the young Obama declared, “There is not a liberal America and a conservative America – there is the United States of America,” and of the triumphant conventions in 2008 and 2012 when he made history as the country’s first Black president.

Nor was there any time for the elegiac long goodbye of 2016 when, with chants of “Four more years!” in Philadelphia, Obama championed Hillary Clinton and offered living proof that democratic norms require even popular leaders to relinquish power.

In 2020, Obama was back in the city where the US constitution was drafted and signed. But this time he stood alone at a lectern in the Museum of the American Revolution. Usually presidents go into bat for their own legacy, but the message was that the legacy of George Washington and other founding fathers is now at stake.

Obama’s speeches are often lauded for their poetry but this time his language was cold and muscular, using the word “democracy” 18 times. The man who made famous the slogan “Hope and change” had found that the first of those is not always enough. “I did hope, for the sake of our country, that Donald Trump might show some interest in taking the job seriously,” he said. For a long time the 44th president has declined to use Trump’s name. No more.

In the special intimacy of a virtual convention, where participants speak directly to you, the viewer, Obama went for the jugular: “For close to four years now, he’s shown no interest in putting in the work; no interest in finding common ground; no interest in using the awesome power of his office to help anyone but himself and his friends; no interest in treating the presidency as anything but one more reality show that he can use to get the attention he craves.”

In an echo of his wife Michelle’s suggestion in her speech on Monday that Trump is simply incapable of being the president that America needs, Obama said: “Donald Trump hasn’t grown into the job because he can’t. And the consequences of that failure are severe.”

No one made his point more spectacularly than Trump himself, who provided his own form of live-tweeting the speech with baseless interjections such as: “HE SPIED ON MY CAMPAIGN, AND GOT CAUGHT!”https://tpc.googlesyndication.com/safeframe/1-0-37/html/container.html

And yet Obama fell into a familiar trap, implying that Trump is a freak case, a one-off, an aberration. He did not dwell on the forces of white identity politics, social media flame-throwing and politics-as-entertainment that empowered Trump – the notion that he was a symptom, not a cause. There has been little of that this week except from the New York governor, Andrew Cuomo, who observed:“Donald Trump didn’t create the initial division. The division created Trump. He only made it worse.”

Some fear that Joe Biden represents that old status quo. Obama promised that his former vice-president “sees this moment now not as a chance to get back to where we were, but to make long-overdue changes so that our economy actually makes life a little easier for everybody”.

For the past four years, those warning of an existential threat have been accused of “Trump derangement syndrome” and written off as boys who cried wolf. But the president’s recent attempts to undermine that sacred pillar of all democracies, elections, have concentrated minds.

The Democratic congressman Jim Clyburn, whose endorsement of Biden was critical to his nomination, told the Axios website in March: “I used to wonder how could the people of Germany allow Hitler to exist. But with each passing day, I’m beginning to understand how. And that’s why I’m trying to sound the alarm.”

On Wednesday, Thomas Friedman, an influential columnist in the New York Times, warned: “Here is a sentence I never in a million years thought that I would ever write or read: This November, for the first time in our history, the United States of America may not be able to conduct a free and fair election and, should President Trump be defeated by Joe Biden, have a legitimate and peaceful transfer of power.”

But none carries the weight of Obama who, it seems safe to assume, was expressing sentiments shared by the other living former presidents, Jimmy Carter, Bill Clinton and George W Bush.

In what seems like another age, Obama spoke at the African Union headquarters in Addis Ababa about the precious gift of democracy. On Wednesday, haunted by history and fearful of the future, he made his plea for Americans to appreciate its value.