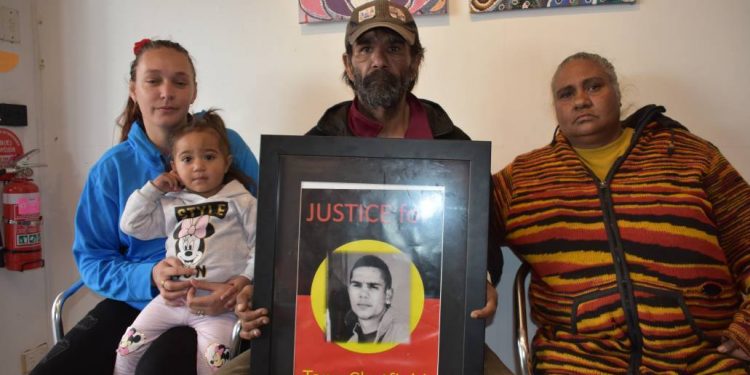 A senior prison nurse who provided “cursory and inadequate” care to an Indigenous inmate in the hour before he took his life in a New South Wales jail has been referred to a professional standards board.

But NSW coroner Harriet Grahame on Wednesday said Aboriginal deaths in custody, like that of young father Tane Chatfield, won’t be reduced unless Australia properly grapples with the factors underlying the “grossly disproportionate” incarceration rate of Indigenous people.

Chatfield died in hospital two days after he was found hanging in his cell at Tamworth Correctional Centre on 20 September 2017.

The 22-year-old had only been back in the prison for an hour when he was found, after spending a night in Tamworth hospital following multiple seizures in his cell.

Grahame on Wednesday ruled the death suicide but was critical of the prison system’s care for the Kamilaroi Gumbaynggirr Wakka Wakka man.

Before being escorted back to his cell after returning from hospital, Chatfield was assessed for “only a matter of minutes” by senior nurse Janeen Adams. The nurse had little understanding of why he’d gone to hospital.

“The failure to make inquiries about the reason for Tane’s admission to hospital demonstrates a lack of clinical care and a failure to establish a rapport with the patient,” the coroner said in her written findings.

Adams gave evidence that the prison officer accompanying Chatfield to hospital gave conflicting clinical information and made no mention of seizures. No hospital discharge summary was available at the time.

While finding parts of the nurse’s evidence “inherently implausible”, the coroner wasn’t in a position to definitively find that Adams knew about Chatfield’s seizures.

“However, it is clear that whether or not she actually knew, she should have known,” Grahame said, outlining various options available to the nurse. “She could simply have asked Tane himself.”

Adams previously told the court she had “many, many years of experience” as an emergency department nurse.

“In my view, the care (Adams) provided to Tane was cursory and inadequate,” Grahame said, before referring the matter to the Nursing and Midwifery Board of Australia.

Grahame was also critical of the decision to place Chatfield in a cell on his own while awaiting the hospital discharge summary, and the fact that he was able to find a hanging point in that cell.

Among her seven recommendations, she pressed the boss of NSW’s prisons to urgently audit and remove all hanging points in the Tamworth cells.

She called for next of kin to be notified if an inmate was taken to a hospital in a medical emergency, even if that inmate was not ultimately admitted.

Grahame also said Aboriginal health workers should be actively recruited to work in Tamworth prison where more than half of the inmates are Indigenous.

The coroner mentioned the failure of the NSW justice system to appropriately reduce the “grossly disproportionate incarceration of Indigenous people or to properly grapple with the underlying factors”.

“Quite simply, more young Aboriginal men like Tane must be diverted away from the criminal justice system if we are to reduce the number of Aboriginal deaths in custody nationally,” she said.

Chatfield first entered custody aged 14 and had spent two years on remand leading up to his death.

“Tane’s death must be understood in its context of real social injustice, ongoing dispossession and his lived experience of inter-generational trauma,” the coroner said.