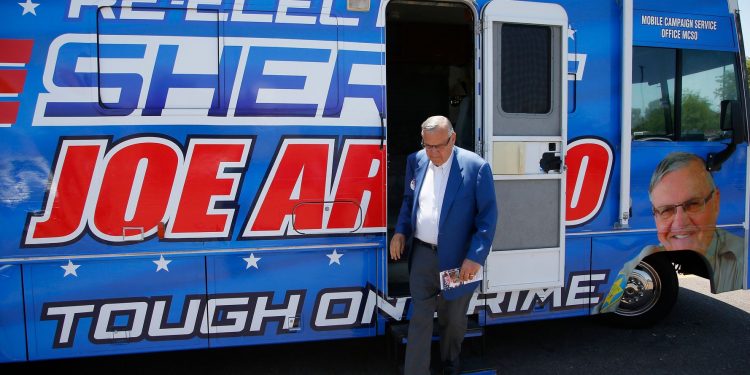 Joe Arpaio, the former Arizona sheriff notorious for his abusive policing and hardline anti-immigration tactics, has lost his bid to win back the post he held for 24 years.

An early Donald Trump supporter and proponent of the racist theory that Barack Obama was not born in the US, Arpaio lost the Republican primary for Maricopa county sheriff to a former aide, Jerry Sheridan. Sheridan will face off against Democrat Paul Penzone in the November elections.

This is Arpaio’s second failed attempt to return to politics since Trump pardoned him in 2017, months after he was convicted of criminal contempt of court for violating a judge’s order to stop racially profiling Latinos. In 2018, he finished last in a three-way race for a Senate nomination in Arizona. This latest defeat likely signals an end to the 88-year-old’s political career.

But Sheridan, a 38-year veteran of the sheriff’s office, has promised to carry on Arpaio’s legacy of harsh, anti-immigrant policing. Arpaio’s legacy also lives on in Trump. “Sheriff Joe” was a precursor to Trump, said Chuck Coughlin, a Republican consultant in Arizona, in a recent interview with the Guardian. Arpaio, who called himself “America’s toughest sheriff”, became infamous for his reality star showmanship and anti-immigration crackdowns long before Trump. “He birthed that nationalism narrative that Trump is now using,” Coughlin said.

As the sheriff of Phoenix from 1992 through 2016, Arpaio created the “Tent City” jail that he compared to a concentration camp, where inmates were forced to work in chain gangs in Arizona’s 120F heat. His department racked up $147m in taxpayer-funded legal bills, and botched the investigations of more than 400 sex-crimes complaints.

But he’s most well-known nationally for his anti-immigration tactics. Embracing a national program that allowed his officers to act as immigration agents, he invited camera crews along on raids. A federal judge in 2013 found that his department racially profiled Latinos, and his traffic patrols targeted immigrants.

Voters eventually tired of his hardline tactics and voted him out in 2016. His campaign this year vastly outspent Sheridan’s, but to no avail. Though Sheridan has vowed to carry on some of Arpaio’s signature policies if elected, he has indicated he’ll do so without bombast and theatrics. Sheridan, like Arpaio, was found guilty of civil contempt of court for disobeying an order to stop racial profiling but was not charged criminal contempt.

Penzone, who unseated Arpaio in 2016, is still regarded as the favored candidate in November. Political strategists believe that Arpaio’s fall from power in Arizona could foretell Trump’s fate in November.

Arpaio’s nationalism, as well as Arizona’s infamous “show me your papers” law, which gave law enforcement sweeping powers to target Latinos, galvanized a generation of progressive activists – many of whom have been elected to serve into local and state office. “The state is becoming more diverse, and it’s becoming more Latino – and it’s becoming younger,” said Marisa Franco, the co-founder of the social justice advocacy group Mijente, in an interview with the Guardian. “It awakened an electorate that’s, I think, more justice-minded.”

Moderate Republicans are also disassociating from the diehard nationalism that Arpaio – and Trump – represent, according to Coughlin. “All of our research shows that a majority of Republicans want real immigration reform,” he said. “[Trump has] a weapon in a way that doesn’t appeal to most Arizonans.”