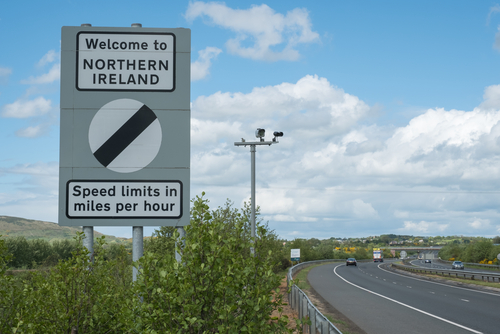 Republic of Ireland and Northern Ireland border sign on M1 motorway. Ireland. May 2017

Brussels (Brussels Morning) Northern Ireland’s Democratic Unionist Party (DUP) announced on Sunday that it will be seeking a judicial review of the Brexit agreement’s Northern Irish Protocol with the goal of discontinuing it on grounds that it has caused widespread confusion among businesses, Deutsche Welle reports.

The Protocol is a provision within the divorce treaty signed by the EU and United Kingdom which aims to preserve the 1998 Good Friday Belfast Agreement, by avoiding a hard border between Northern Ireland and the Republic of Ireland.

As the UK left the bloc’s single market, the Protocol was put in place to keep Northern Ireland within the single market, necessitating customs checks between the province and mainland Britain, a provision that has since caused trade disruptions on goods crossing the Irish Sea.

DUP leader Arlene Foster argues that the Protocol is incompatible with the 1800 Act of Union and the 1998 Good Friday Agreement, and wants courts to weigh in on the subject. “Fundamental to the Act of Union is unfettered trade throughout the United Kingdom”, Foster maintained in a statement.

“At the core of the Belfast Agreement was the principle of consent, yet the Northern Ireland Protocol has driven a coach and horses through both the Act of Union and the Belfast Agreement”, she claimed. “The views of Unionists will not be sidelined, nor our concerns silenced.”

The largest pro-UK party in Northern Ireland, the DUP supported Brexit but made it virtually impossible for former Prime Minister Theresa May to secure a divorce deal with the EU, as it’s the 10 Unionist MPs in the House of Commons refused to accept a hard border in the Irish Sea.

After May’s successor Boris Johnson won a larger majority in the ensuing general elections, the DUP was sidelined since its support was no longer crucial, and Johnson’s cabinet included the Protocol in the Brexit agreement.