Northern Ireland in 2021: A tale of two markets

by Sietske de Groot
in Our pick 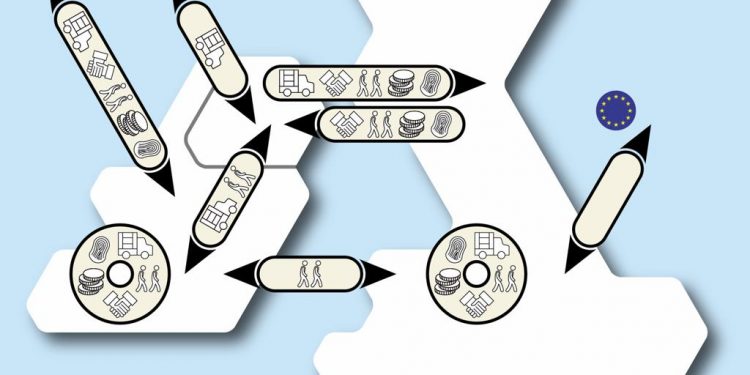 We can finally begin to leave the exasperation and unknowns around the EU-UK trade deal behind, but one thing has been certain all along: On the first of January 2021, the Ireland/Northern Ireland Protocol in the Withdrawal Agreement will come into effect. This is when the tale of two markets starts for Northern Ireland.

Belfast (Brussels Morning) The United Kingdom will be fully outside the EU, including the Single Market and Customs Union. However, the UK’s only land border is shared with an EU member country: The Republic of Ireland.

To separate the EU and the UK jurisdictions and customs territories, this land border would have become the EU-UK external border. However, the border on the island of Ireland is required to stay open under the Good Friday Agreement — the treaty that regulates the relationship between the Republic of Ireland and Northern Ireland and that aims to maintain peace in the area.

An open border would disrupt the proper functioning of two adjacent customs territories, and a solution was found by creating a special position for Northern Ireland: In 2021, Northern Ireland will straddle both the EU and the UK internal markets. It will be a place where two jurisdictions meet without a border.

Here is a flavour of the complexity. Northern Ireland, as a devolved component of the UK, will form part of the UK Internal Market, the UK customs territory and the UK VAT area. However, it will continue to follow EU customs rules, EU product rules, EU VAT rules and EU state aid rules.

This situation applies to trade in goods but not to trade in services, even though in today’s economies the two are often intertwined. Also, Northern Ireland will continue to form a Single Electricity Market and a Single Epidemiological Unit with Ireland. People will be able to continue to move freely between Ireland and the UK under the Common Travel Area. But monetary and fiscal systems will be not aligned.

So, how is this situation whereby Northern Ireland is being part of both the UK and the EU internal markets going to work?

The customs and regulatory border between the UK and the EU markets will be in the Irish Sea and, therefore, moving goods from Great Britain to Northern Ireland will involve customs, or “additional processes”, in UK Government parlance.

Two schemes will support UK businesses that move goods to Northern Ireland. The Trader Support Service (TSS) takes care of the customs process. The UK Trader Scheme (UKTS) ensures that goods that come from Great Britain and stay in Northern Ireland will be exempt from origin certificates, and also from tariffs, should the product in question not satisfy the origin rules in the EU-UK Trade and Cooperation Agreement (TCA).

If, for example, quilt kits are supplied from the West Midlands to a shop in Coleraine to be sold locally, the TSS does the paperwork, and if the shop owner is authorised to use the UKTS, proof of origin can be omitted.

An open border between two markets can be a magnet for smugglers. The EU Single Market is protecting its integrity by deeming every product that comes from Great Britain to Northern Ireland as “at risk” of being moved into the EU, in casu Ireland.

Conversely, the UK will only allow “qualified” Northern Irish products and businesses to move goods from Northern Ireland to Great Britain. Since the EU-UK deal prevents imposition of tariffs and quotas, the open border between the two markets will be less problematic.

However, goods only move free of tariffs if they originate in either the UK and the EU.

Another issue concerns the so-called “land bridge” and other multi-border trade routes. The most efficient trade route from Ireland to the rest of the EU is overland through the UK.

The market will dictate what will happen next, but sailings from Rosslare in Ireland to Cherbourg in France may become more frequent. Trade from Northern Ireland to Wales and South West England via Ireland will be domestic but involves an international border, potentially requiring transit arrangements.

Businesses are mostly relieved that a trade deal was finally reached between the EU and the UK. However, trading with the EU will be very different from 2021 onwards.

Even though the EU-UK agreement is the biggest deal in the EU’s and UK’s trade portfolios, it is far from offering the UK the unfettered access to the European Single Market that the EU offers to its economic operators.

This is true for the services sector in particular, which has not been served well by this deal. Businesses in this sector will trade partly under the EU’s and UK’s respective WTO schedules for access to their services markets.

If, for example, an engineer from Belfast installs a machine in Dublin, the device will move freely over the border, as will the engineer, but the installation service will be subject to local Irish rules and the invoice will need to reflect different VAT treatment for goods versus services. The haulage sector is facing similar challenges.

Businesses whose supply chains cover Great Britain, Northern Ireland and Ireland are advised to consider where the rules that apply to their business activities originate from, whether these are relevant articles in the Ireland/Northern Ireland Protocol, the EU-UK TCA, WTO schedules, domestic, or even devolved legislation.

Brexit saw one market split into two, and saw trade rules multiplied. Northern Ireland sits astride the European and the UK markets. The new rules will keep the land border open on the island of Ireland and they will ensure free access to two substantial markets for Northern Ireland.

However, Northern Ireland will also be an area where many trade regimes come together, and where business transactions may be classified as international trade or not, depending on how the rules are designed, enforced and interpreted.

All this will make Northern Ireland a fascinating part of the UK and EU markets and could equally mean regulatory nightmares or unexpected opportunity. Time will tell.