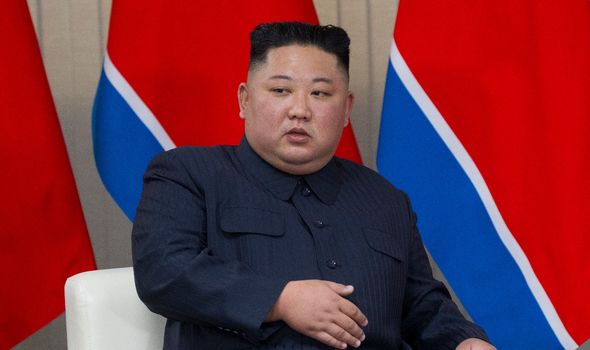 KIM Jong-un has continued his war on sex by publicly executing six people – including four party officials – for their involvement in a prostitution ring.

All were shot dead in the Hermit State‘s capital, Pyongyang, on July 20 after being accused of either pimping or buying sex at a public bathhouse popular among influential city residents. The women involved were all female students at performing arts colleges in the city, sources told the US-backed Radio Free Asia (RFA) website.

One insider suggested an enraged Kim Jong-un himself, a supporter of the two universities involved, had given the order personally.

An official of the Pyongyang municipal judicial agency said: “I was at the scene of the public execution and saw four Pyongyang party officials and two pimps being executed for organised prostitution.

The scandal was threatening to engulf the Workers’ Party of Korea, the insider said.

The source explained: “Many people, especially party officials and policymakers in Pyongyang are involved in this case.

“The head of Munsuwon and even famous movie stars conspired to arrange sexual encounters with the Central Committee and other Korean Workers’ Party officials, offering female students in their 20s a side job with guaranteed pay of more than $500 per month.”

Police were notified by students who discovered the truth about what was expected of them, having initially been oblivious, the source said.

They added: “When the female college students received money without knowing what it was for, and were then forced to have sex, they reported it to law enforcement authorities.

“They arrested and investigated those involved in prostitution.

In a direct reference to Kim, they said: “It was reported to the Highest Dignity because of the severity of the case.

“Kim Jong-un, who was enraged by the students at his favorite schools becoming involved in the sex trade, appears to have ordered the execution by shooting.”

“There have been many cases of prostitution in Pyongyang recently, but no one has been shot to death over it.”

North Korean law stipulates prostitution can a sentence of one to five years of hard labour – but Kim apparently did not regard such a punishment as sufficient.

The insider said: “It seems to be that because central officials and college students are involved, the authorities wanted to make an example through the public execution.”

Public executions are reasonably common in North Korea, and another source said “many Pyongyang citizens” had attended the latest.

They added: “Public bathhouses in major cities, including Munsuwon in Pyongyang, are used as a base for crimes like prostitution and drugs.

“High-end bathhouses like Munsuwon, or Eundeokwon in the provinces, are particular in that the crimes involve high-ranking officials and the rich.

“Corruption and moral debauchery among the central and municipal officials has gone too far in recent years.

“That’s why the authorities are stoking alarm in the officials through this case.”

They continued: “Although the case seems to have been concluded by the public shooting of sex traffickers this time, investigations by law enforcement continue to reveal college students becoming involved in sex trafficking crimes.

“As the authorities continue to investigate female students at colleges in Pyongyang, it is hard to know what the aftermath of this particular case will be or how far it will go.”

Since returning to public life after persistent reports of his death, 36-year-old Kim appears to have launched a moral crusade targeting what he sees as immoral behaviour.

In May it was reported he had declared the “impure acts” of teenagers to be treasonous, with their parents facing punishment for failing to control them, in a bizarre “war on sex”.

At the time another source told RFA: “The reason behind this order is that the local Kimilsungist-Kimjongilist Youth League in Sinuiju inspected high school students, and found that some high school boys and girls hang out with local gangsters, live together, and commit immoral acts such as prostitution.

“The immoral sexual behaviour of students, who are influenced by capitalist lifestyles, has become a problem.”

Ruth Ann Monti, the US author of North Korea in 100 Facts, further suggested footage of Kim raging at public officials over delays to the construction of a hospital in Pyongyang recently may have resulted in stiff penalties, with further executions not off the table.

She told Express.co.uk: “I’m sure some of those hospital officials are in prison or “re-education camps”.

“I don’t know what his standard is for executing.

“If he thinks the lack of progress and corruption are part of an effort to bring him down, he’ll execute for sure.”