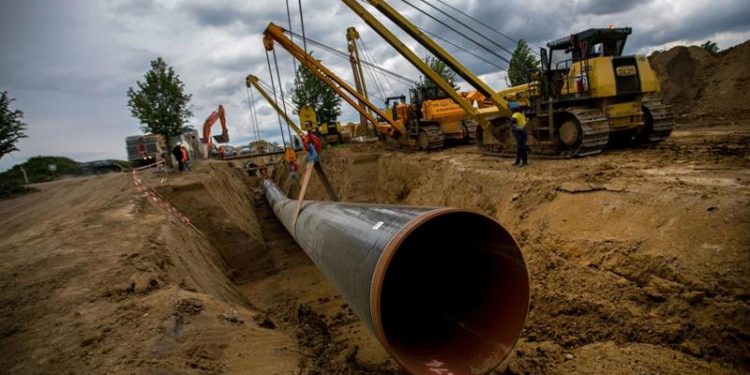 German Chancellor Angela Merkel said all options are on the table when it comes to Germany’s reaction to the poisoning of Russian opposition leader Alexei Navalny. This means that the Nord Stream 2 gas pipeline connecting Russia and Germany could be in jeopardy, DW reports. Answering a reporter who asked whether Merkel still insists on separating the poisoning from the Nord Stream 2 project, German Government spokesman Seteffen Seibert noted that Merkel had expressed her belief that it would be wrong to rule out any options. Berlin, he added, is not prepared to wait for months in order for Moscow to shed light on the poisoning.

The pipeline project, now nearing completion, was launched in 2018, funded by five energy companies. Some 1,855 km of pipeline had been laid so far in Russian, Finnish, Swedish and German waters. The United States remains critical of the project and the dependence of European countries on energy from Russia. US President Donald Trump has threatened sanctions in an attempt to force contractors to put the project on hold. The German Economy Ministry has warned that halting the project significantly impact the provision of energy to Germany. There is disagreement within Merkel’s grand coalition Government as to whether the Navalny poisoning should be separated from the project.

The Chairman of the German Eastern Business Association (OAOEV), Oliver Hermes, has warned that halting the project would discourage investors from supporting projects in Germany and the EU. All relevant EU authorities, he pointed out, had approved the project as had national authorities in Germany, Sweden, Denmark and Finland. If the project is halted, Europe would have less gas and face higher prices< Hermes said. Moreover, demand would have to be met through imports from the US, liquefied natural gas from Qatar and/or other pipelines from Algeria, Libya or Azerbaijan.

Questioning the project in the wake of the poisoning of Navalny, German Foreign Minister Heiko Maas, according to a Reuters report, expressed the hope that Russia would not force Germany to change its position on the Nord Stream 2 project.