No light at the end of the Lebanese tunnel 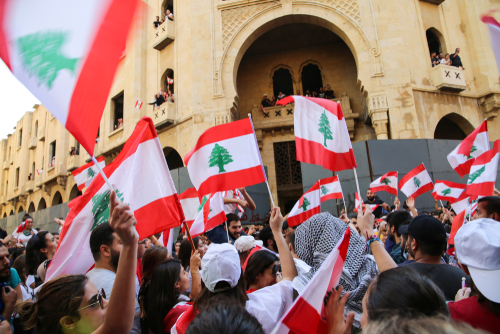 Paris (Brussels Morning) A short-term compromise was reached over the weekend in Lebanon, to ease the fuel crisis that plunged the country into almost complete darkness last week. As violence and conflict over access to fuel increased and crucial infrastructure came to a halt, hospitals, businesses, schools, and the financial and political collapse seem endless.

“The Lebanese wake up every day trying to figure out the value of whatever savings they have left and whether or not they can afford everyday goods, the prices of which fluctuate daily” notes Joseph Bahout, director of the Issam Fares Institute at the American University of Beirut. The Lebanese lira has lost 90% of its value within two years, sliding from 1,500 to the dollar to a current street rate of around 22,000. The massive explosion at the Beirut port on 4 August 2020, for which nobody has so far been held to account, added billions of dollars to the damage and has led to a third of the population living under the poverty line.

A deal was reached on Saturday at the Baabda presidential palace to retain fuel prices at subsidised levels, a compromise seeking to allow fuel importers to release more stock and reduce shortages. Since the deal was announced, prices hiked by 66%, at an exchange rate of 8,000 Lebanese pounds to the dollar, from 3,900 which was agreed in June, Lebanon’s Naharnet reports.

But according to Lebanese economist Nassib Ghobril the agreement will not solve the problem. “The solution is to lift subsidies completely. That would lead to the disappearance of these long lines at the gas stations, and discourage smuggling” especially into Syria, he said.

In recent weeks there has been a growing rift between President Michel Aoun and Banque du Liban (BDL) Governor Riad Salameh. According to western diplomatic sources, quoted by the L’Orient – Le Jour daily, Salameh and the opposition were pushing for an end to subsidised prices on basic goods such as fuel, in order to save on the fast depleting foreign reserves that the country still holds. In the ensuing panic after Salameh announced the end of subsidies, distributors scaled back deliveries until new prices were announced, desperate motorists formed long queues outside petrol stations, while schools and hospitals were forced to cease their activities. On 15 August, more than 30 people were killed in the northern Akkar province, when a fuel tank exploded as they were clamouring for petrol. But completely ending the subsidies scheme would lead to an even faster social collapse, a scenario which the president wishes to avoid at any cost.

Instead, L’Orient maintains, the president seeks to have Salameh dismissed by using the forensic audit into the financial collapse to hold him accountable for the country’s woes. But this decision would need the backing of Prime Minister-designate Najib Mikati and of international governments, such as the US and France, who still support Salameh and the end of subsidies. It is also suggested that the president will continue impeding the formation of a new cabinet, until he gets reassurances from Mikati that the BDL governor will be dismissed at the first meeting of the new government.

This further complicates the cabinet formation, a lingering impasse of more than two years that saw all international aid to Lebanon being put on hold. This is mainly due to the president’s insistence to retain a “blocking third” within the cabinet, by appointing ministers of his own choice. As such, this is not unconstitutional but it is thought that Aoun prepares the ground for his succession by his son-in-law and former Minister of Foreign Affairs and of Energy and Water. “Aoun is insisting on choosing partisans affiliated with Bassil to fill key ministerial portfolios, including the energy portfolio”, according to sources close to Naharnet, now hitting another dead-end, “unless Aoun decides to be less rigid”.

Hezbollah and the Iranian ship

Amidst the behind-the-scenes political schemes, Hezbollah leader Hassan Nasrallah announced last week that a ship carrying fuel from Iran was bound for Lebanon, while warning the US and Israel against taking any measures or attacking it. He added that it would “be considered Lebanese soil as soon as it leaves port”, as the move would risk violating US sanctions against Iran and further sanctions against Lebanon.

On Sunday, Nasrallah said that a second ship would soon follow: “These are to help the Lebanese citizens and not only our constituency”, he added during a speech for the Ashura Shiite religious commemorations. Furthermore, Nasrallah clarified that Hezbollah “are not taking the place of the state, nor are we an alternative to companies that import fuel”, but did not elaborate on how the shipment would be offloaded.

Former PM Saad Hariri denounced Hezbollah’s move, warning that “Iranian vessels will carry additional dangers and sanctions for the Lebanese” and added: “Considering the Iranian ships [in] Lebanese territory constitutes the climax of compromising our national sovereignty… as if [Lebanon] is an Iranian province”.

According to Reuters reports, the U.S. ambassador to Lebanon, Dorothy Shea, said on Thursday that Lebanon didn’t need Iranian tankers, citing “a whole bunch” of fuel ships off the coast waiting to unload.

Carnegie Beirut Director Michael Young tweeted: “If Iranian fuel comes, some argue, Hezbollah will sell it at a lower price, undercutting other fuel importers. So the benefit to them of staying in the market will decline, which is why some are leaving. The Lebanese will be forced to finance Hezbollah”.

Severe shortages in medicine and fuel, water access at risk

While the fuel crisis took a political turn, UNICEF warned that the Lebanese population was at risk of running short of access to clean and safe water in the next few days. “If four million people are forced to resort to unsafe and costly sources of water, public health and hygiene will be compromised, and Lebanon could see an increase in waterborne diseases, in addition to the surge in COVID-19 cases” said UNICEF Executive Director Henrietta Fore.

She further warned that “vital facilities such as hospitals and health centres have been without access to safe water due to electricity shortages, putting lives at risk”. The American University of Beirut Medical Center said it was threatened with a forced shutdown because of shortages of fuel used to generate electricity.

The World Health Organization’s Director Tedros Adhanom Ghebreyesus also tweeted: “I echo my colleague Henrietta’s call for restoration of power supplies to ensure clean water to protect the health and welfare of millions in Lebanon”.

The International Support Group for Lebanon expressed its deep regrets for the loss of life in the north and for the deteriorating situation in a statement, calling for an urgent solution to the political imbroglio of the government’s formation.

“This tragic incident occurred in the context of acute fuel shortages now affecting Lebanon, with severe repercussions for essential services, including electricity provision, public health, public water supply, as well as businesses and livelihoods” the statement read, adding that the fuel crisis highlights “the utmost urgency of forming a government capable of taking the situation in hand, meeting the immediate needs of the people of Lebanon, initiating the needed reforms, and paving the way for international support”.