No compromise over Brexit trade deal at Brussels dinner talks 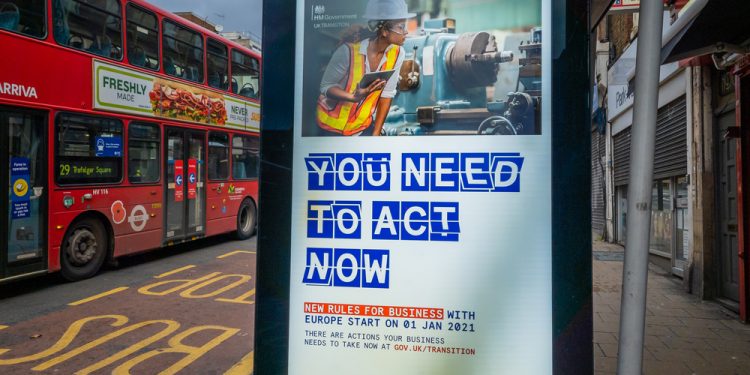 London. UK 2020: a billboard advertisement by the government informing businesses trading with the EU to act before the end of the Brexit transition period.

Brussels (Brussels Morning) The EU-UK negotiations over a post-Brexit trade agreement are nowhere nearer a conclusion. A busy couple of days will follow with EU leaders convening in Brussels on Thursday and Friday. A compromise with the UK could only be expected by Sunday 13 December.

British Prime Minister Boris Johnson finally made his way over to Brussels for a meeting with Commission President von der Leyen over dinner Wednesday. Fish was on the menu, a tribute to the irony of the dispute over fisheries and future access to British territorial waters.

This was a meeting on the edge with the parties signalling they want a deal but not at any price. For the EU, access to its internal market regulation is conditional upon acceptance of a number of competition rules, whereas in Johnson’s view these are incompatible with British sovereignty since a future trade agreement would entail a supra-national adjudication mechanism. The outstanding issues were referred back to the negotiators.

Ahead of the dinner crunch talks, Germany’s Chancellor Angela Merkel insisted on protecting the integrity of the EU’s internal market when she addressed the German Bundestag, indicating she would not compromise on competition rules.

Belgian Foreign Minister Sophie Wilmes has asked the Commission to come up with a contingency plan in the event of a no deal scenario materialising in three weeks. Another possibility is that even if no trade deal is agreed before the year’s end, talks with the UK could possibly resume again next year.

While some observers considered a deal probable prior to Wednesday evening’s dinner, with time elapsing and considerable obstacles still in the way of an agreement, a deal now seems rather unlikely.

If it comes to a no deal scenario, the impact for British industry will be considerable. With more than half of the UK’s imports coming from mainland Europe, there is already a surge of containers entering UK ports with companies anticipating bottlenecks ahead.

If applied from next year, tariffs will vary from a few percent on food to 10% on cars and overall food prices in the UK could be up by a few percentage points, according to the BBC.

The transition agreement has meant that the UK still applied EU rules after leaving the EU at the end of January this year. However, this week’s agreement on Northern Ireland means that the new rules governing trade across the Irish Sea will come into effect from next year, deal or no deal.

Food exports will be subject to checks when leaving UK ports, even though most of the intra-UK trade with Northern Ireland will be exempted from any tariffs. An agreed scheme of trusted traders should mean no disruptions when goods are pre-checked before crossing the Irish Sea to avoid checks at land borders into Ireland.

The Irish government considers the matter is closed. As for the UK government, the threat of breaking international law by applying tariffs on goods entering the EU has been removed.