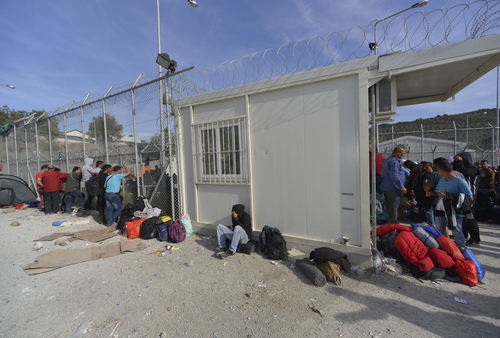 LESVOS, GREECE - october 14, 2015. Refugee migrants, arrived on Lesvos in dinghy boats, they wait in refugee camps for the ferry to Athens continuing their journey through Europe to seek asylum.

Amnesty International, Save the Children, Doctors Without Borders, Diakonie Deutschland and Caritas, among others, released a joint statement on Tuesday ahead of the meeting of EU interior and justice ministers, DW reports.

“Germany means the prospect of security and a future for all the people it takes in, especially for children”, the statement declared, while noting “there are still many more, particularly vulnerable people seeking protection in the refugee camps on the Greek islands, that Germany can — and must — help”.

Germany took in roughly 2,700 people from Greek camps in 2020 as part of its relocation programme which was discontinued in April this year. The group of NGOs and organisations insists the programme must be revived, citing the abysmal quality of life in the camps.

“Despite substantial cash payments and aid deliveries, living conditions for refugees in hot spots on the Greek islands remain dire — both in terms of conditions for having their applications accepted and access to the asylum system”, the statement said.

The group warned that conditions along the EU’s external borders are worsening, which they maintain serves as an obstacle to fair asylum applications. The statement argued that Germany needs to do more to take in people from the camps and to push the bloc in this direction.

In a report released on Monday, the German Federal Office for Migration and Refugees (BAMF) stated that it received 67,646 asylum applications this year, roughly 12,000 of which were recognised as refugees.