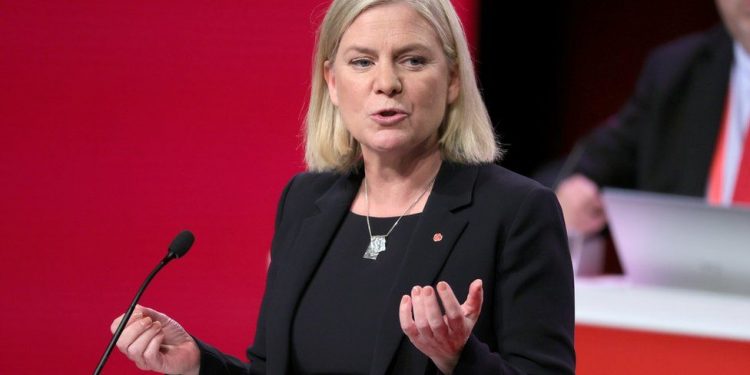 Brussels (Brussels Morning) Swedish Social Democrat Magdalena Andersson became the country’s first female Prime Minister on Wednesday, an achievement that threatens to be overshadowed by a looming budget crisis, inherited from her predecessor.

Andersson emerged as the most likely head of government after her centre-left party clinched a last-minute deal with the former communist Left Party. Soon after the parliament confirmed her as the new Prime Minister, she faced the likelihood of her first defeat.

With parliament scheduled to vote on the budget proposal on Wednesday, it became apparent that her nascent government’s proposals would be swept aside in favour of amendments pushed through by the centre-right opposition parties, which have proposed a tax cut on petrol and higher spending on the justice system in a bid to tackle gang crime more effectively.

Sweden was plunged into a government crisis last June, when the Left Party refused to continue backing Social Democrat PM Stefan Lofven, over his plans to abolish rent price caps. Lofven resigned, but ultimately succeeded in returning to power in July as several lawmakers broke party rank to support him.

In August, Lofven announced he would resign as party leader at his party’s congress in November. The party ultimately chose then-Finance Minister Andersson as its new leader on 4 November. Lofven resigned as PM a week later, at which point the Speaker of the Riksdag tasked Andersson with forming a new government.

Andersson finally succeeded in forming a minority government, and was appointed PM under the Riksdag principle of negative parliamentarism, which requires a majority of “no” votes to reject a PM-candidate.

While she seemed likely to lose her first important battle in the Riksdag today, Andersson pledged to carry on, stating that the opposition’s budget amendments are something she “can live with”.