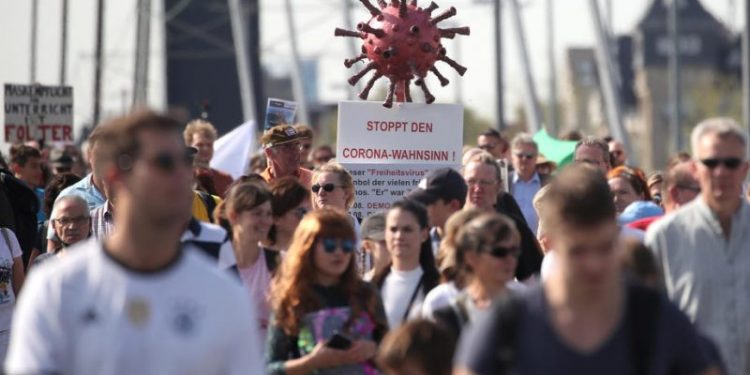 Brussels (Brussels Morning) Anger over new restrictions grew on Sunday as governments in Europe announced imposing more measures with the aim of curbing the spread of coronavirus, France 24 reported Sunday.

Protesters clashed with security forces two nights running at the weekend in several cities in Spain. Protests in some cities were marred by vandalism and looting. Almost all Spanish regions have closed their borders to prevent long-distance travel and the country imposed a nationwide curfew. Protests were the most unruly in Madrid, with makeshift barricades erected on the Gran Vía and rubbish bins set on fire.

Italy saw protests last week, with the government announcing new restrictions which should include bans on travel between regions, weekend closing of shopping centres, limitations on commercial activities and an earlier night-time curfew. Italian Health Minister Roberto Speranza has been pushing for a nationwide lockdown, pointing to negative epidemiological trends.

In the UK, many have expressed concern over the economic impact of restrictions announced for Thursday, with Night Time Industries Association (NTIA) lobby group CEO Michael Kill warning that the new lockdown represents a financial Armageddon for businesses.

In Germany, Chancellor Angela Merkel has ordered lockdowns from today, Monday, until the end of November, with bars, cafés, restaurants, theatres, operas and cinemas to close, but Germans will not be confined to their homes, RFI reported Monday.

Belgium has announced more restrictions from today as the country now suffers the highest number of confirmed infections per capita in the world, while Portugal has announced a partial lockdown for Wednesday.

In Prague, the capital of the Czech Republic, protests against restrictions imposed with the aim of curbing the spread of coronavirus turned violent last month.

Commenting on announced lockdowns in Europe, US President Donald Trump criticised the planned restrictions as draconian, pledging not to shut down parts of the US, DW reported Sunday. Trump, on the campaign trail, said the US  Government would not impose any lockdowns while predicting that his rival for the presidency would mimic European restrictions.