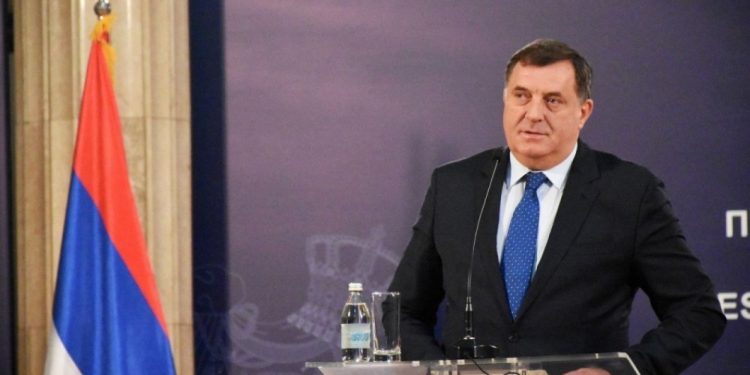 Inzko used the position’s executive powers, as protector of the 1995 Dayton peace agreement, to unilaterally impose a law mandating jail sentences for those who deny or downplay the 1995 Srebrenica massacre, where more than 8,000 Muslim men and boys were slaughtered by Bosnian Serb forces. The law also prohibits glorifying convicted war criminals, including naming streets, squares and other spaces after them.

The leader of the Serb-dominated Republika Srpska, Milorad Dodik, immediately denounced Inzko and his law. Now, the Serbian entity in BH seems increasingly prepared to challenge, ignore and defy the new law. Dodik and many other Serb politicians regularly acclaim wartime leaders of Republika Srpska, Radovan Karadžić and General Ratko Mladić, as heroes and martyrs, despite both having been found guilty of genocide by The Hague Tribunal.

On Thursday, Dodik told local media that he had reported himself for genocide denial, supposedly “to ease the burden on Bosniaks who could be exposed to pressure of their political leaders to report him”. He called on all Serbs in the Republic of Srpska to report themselves too.

Dodik also launched and was the first to sign a petition last week, inviting Serbs to demand the rejection of the genocide denial law. Since its launch, only 80,000 out of 1.3 million residents of the Republic of Srpska have signed it.

On Friday, the People’s Assembly of the Republic of Srpska held a session that was closed to the public, voting on two bills – both proposed in an urgent procedure. Journalists were barred from attending Friday’s assembly session, where the two bills were deemed likely to receive wide support from Bosnian Serb parties.

The first bill would make it a crime to “mock, denigrate or express loathing towards” the Republic of Srpska, punishable by up to three years in prison. It also provides for a sentence of six months-to-five years should a person claim that the Republic of Srpska was an aggressor, a product of aggression, or genocidal.

The second, and more contentious bill, would render Inzko’s law unenforceable in the Republic of Srpska, by instructing the entity’s local police authorities to disregard it and to refuse assistance to federal authorities in enforcing it. This could lead potentially to future clashes between federal and local police.

Aware of the complicated situation he will be facing, Schmidt gave an interview for Deutsche Welle, published today, in which he called on all citizens of Bosnia and Herzegovina to “just relax”. The former Minister of Transport and Digital Infrastructure under Chancellor Angela Merkel, Schmidt emphasised he is coming to BH not to represent someone’s individual interest, but to represent everyone in equal measure.

“This also includes Serbs”, he said. “Serbs, too, faced a difficult fate in this region, and lived through bad things. This is why some things cannot be viewed one-sidedly”. The HR-designate noted that there other groups live in BH, who are neither Croats, Serbs nor Bosniaks, such as Jews, as well as others, and that they will need to be taken care of.