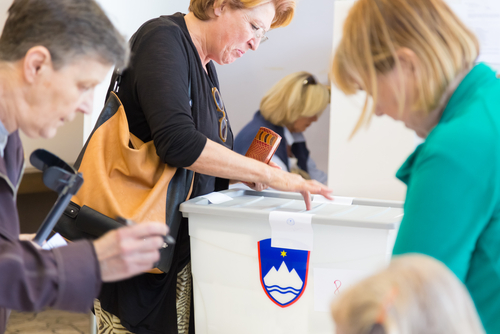 LJUBLJANA, SLOVENIA - JULY 13: People voting on parliamentary election for the 90 deputies to the National Assembly of Slovenia on June 13th, 2014, Ljubljana, Slovenia, EU.

“The results are what they are,” said Janša on Sunday, conceding defeat. “Congratulations to the relative winner.” Janša boasted that his centre-right Democratic Party (SDS) secured more votes than ever before.

SDS, which won 23.5% of the vote managed to increase its number of deputies in the parliament from 25 to 27, but its result was overshadowed by the 34.5% of votes won by the GS. With most of Janša’s coalition partners losing their seats in the parliament, Golob now has a clear route to securing a stable majority with either or both Social Democrats (SD) and the Left, which have won seven and five seats respectively.

Through his four terms, Janša has moved Slovenia into an increasingly authoritarian direction, with civil liberties and press freedom groups warning about the decline of democratic institutions under his rule. With the SDS part of the European People’s Party (EPP), comparisons to Hungarian Prime Minister Viktor Orbán were made, though Janša never approached Orbán’s level of attempting to control the media and the institutions.

Golob will now be handed a mandate to form a new government. Thanking his supporters on Sunday, Golob said all of them were to thank “for freedom coming back to Slovenia tomorrow”. Speaking via a Zoom link, as he is currently quarantined over a coronavirus infection, Golob especially thanked the civil society and youth activists who supported him.

Golob co-founded an energy trading company GEN-I in 2004, and was previously a member of Positive Slovenia party founded by former Ljubljana Mayor Zoran Janković. In 2013., he switched to the ZaAB party of then-PM Alenka Bratušek, becoming party vice president.

In January, he ran for president of Green Action Party (Z.DEJ), a new liberal-green party founded in May last year. After his win, he renamed the party to GS. The party’s ideology is green and social liberalism, and is declaratively pro-European.