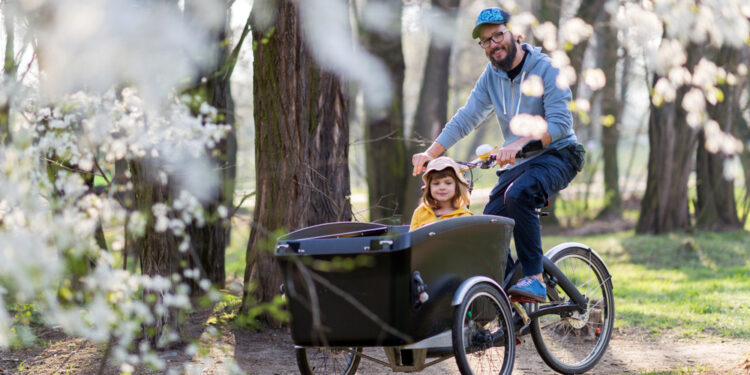 The number of e-bikes and cargo bikes in Brussels continues to rise. This is evident from the annual bicycle observatory of the non-profit organisation Pro Velo. The cargo bikes already account for a tenth of all bicycles. And more than six in ten cyclists now wear a helmet.

The results of the Bicycle Observatory were published on Thursday. The non-profit organisation Pro Velo bases this on various manual counts throughout the year in Brussels, says BRUZZ They are less reliable than the fixed bicycle counting posts , which continue to measure throughout the year. The Pro Velo count allows it to recognize and measure different types of bicycles.

Thirty percent of the cyclists counted drove an electric one. It is striking that many women ride an e-bike, almost half of the electric cyclists were women (48 percent). This means that women are overrepresented on electric bicycles.

In general, the number of women cycling in Brussels continues to increase: just over four in ten cyclists are now women (42 percent). That increase has been steady for several years, Pro Velo notes based on their annual count. This year the same growth has been recorded as last year . Ten years ago it was still 31 percent.

Electric bicycles are still more often used for commuting and less for leisure rides. But the number of e-bikes continues to increase in both groups. Even on Sundays last year no less than a quarter of the counted cyclists rode electric (24 percent). That is more than double their share in 2020 (11 percent).

Shared bicycles are less popular, or at least not for commuting. In the morning counts, only 2 percent of the cyclists rode with a Villo! and less than 1 percent with a free-floating shared bike.

Maybe it’s their many e-bikes, but women also wear helmets more often than men: 65 percent of female cyclists wear one, compared to 59 percent of men. Added up, 62 percent of cyclists wore helmets: a slight increase of 2 percent compared to 2020.

Helmet wear differs greatly per district: in the vicinity of the Weststation, the Dansaertwijk and the Antwerpsepoort, only one in two cyclists wears a helmet. In the vicinity of Vandervelde in Woluwe and at Merode this is three out of four.

They often sit on the back, but on their own wheels the children are still significantly in the minority. At most measuring points, only 1 to 4 percent of the cyclists counted were children. In the Dansaert district this is already one in ten and in the vicinity of Herrmann-Debroux almost one in six. The IJsvogellaan in Watermael-Boitsfort had the highest percentage of children on a bicycle: there were almost one in five of them.

According to the Pro Velo count, there were an average of 10.5 percent more cyclists in Brussels last year than in 2020. Pro Velo has seen an average increase of 11 percent per year since 2010. Earlier figures from the more reliable bicycle counting posts mentioned a double the increase  last year. The count must therefore be understood qualitatively above all.