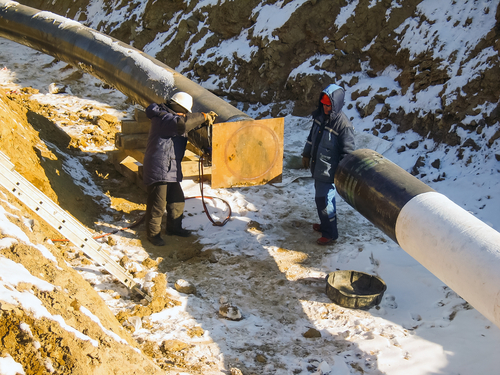 “For 50 years, even in the aggressive times of the Cold War, Germany has bought gas from the Soviet Union, now from Russia,” Laschet declared. “The German government is following the right course.”

Despite growing pressure from the US and an increasing number of EU member-states to halt the pipeline project that aims to double the gas delivery capacity in the Baltic Sea, Germany has resolutely refused to stop the nearly-completed construction.

Chancellor Merkel continues to treat the Nord Stream 2 project as something completely separate from Russian human rights and rule of law violations. Her successor as CDU president, Laschet, echoed her position, pointing out that the US also trades in crude oil with Russia. “Both values and interests are important in diplomacy, but feel-good moralising and domestic slogans are not foreign policy,” Laschet told dpa.

Laschet’s support for the project could spell trouble for his bid to succeed Merkel as Chancellor. Even though the CDU still tops the polls, the Greens are also polling strongly and will likely play the kingmaker after the next elections.

Greens leader Annalena Baerbock recently pressed Merkel’s government to renounce the pipeline project, in response to Navalny’s arrest. “We’ll push hard for that now and in the future,” Baerbock vowed, when asked by ZDF whether her party would halt the project should it enter government.

Meanwhile, the dpa reported on Sunday that construction on the project had resumed late Saturday, despite the sanctions the US recently imposed on the pipe-laying barge Fortuna. As the project’s spokesperson told Brussels Morning last week, the Fortuna is currently in Danish territorial waters, and is bent on completing the final 148-kilometre stretch of the 2,460-km-long pipeline.