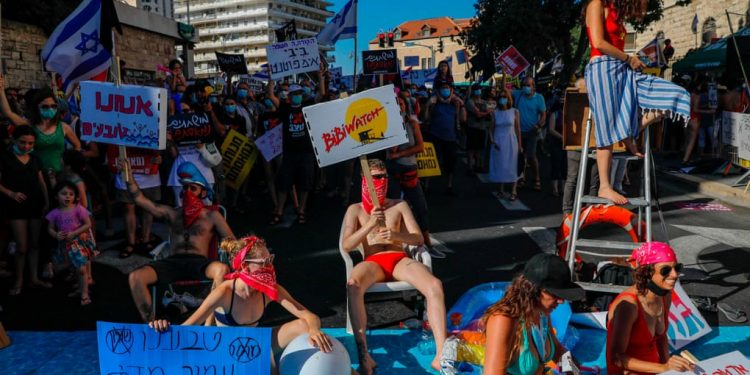 For Benjamin Netanyahu it wasn’t a bad spring this year, considering the previous 12 months.

The prime minister managed, somehow, to continue his treasured run as Israel’s longest-serving leader, despite a scandalous corruption indictment, three national elections that almost ousted him, and a menacing party primary. Having been sworn back into power – his fifth term – in May, the 70-year-old politician won global praise for a swift lockdown, with Israel cited as a textbook example of how to handle a pandemic.

But now it’s summer, and springtime is truly over. Daily temperatures are rising above 36C, and the country is facing an economically disastrous second wave of infections. Rising unemployment and poorly implemented financial aid packages have incited public anger.

Now, a few dozen metres from Netanyahu’s residence in Jerusalem, hundreds and sometimes thousands of people are gathering nightly and calling for him to resign. “There’s a general vibe that this specific government crossed every line – every line morally; every line financially; every line with the coronavirus crisis,” said protester and social activist Ori Givati. “A lot of people are really on the edge of their financial means, and they really don’t think this government is taking care of them.”

As well as the usual demonstrators from Israel’s small but vocal anti-occupation movement and anti-corruption activists, protest numbers have swelled to include artists, environmentalists, students and even people from the dominant right wing. Many who rally are recently unemployed, or business owners now facing ruin in the face of the pandemic.

On Thursday night, the last day of the working week in Israel, people in masks and bandanas had gathered at an intersection for a predominantly peaceful protest, including an orchestral performance. Later, police attempted to disperse the protesters, driving lorries into the area and pushing the crowds back with water cannon. Protesters complained the cannon had pinned them down even as they were attempting to leave.

Along with 54 others, Givati was arrested that night. The 29-year-old had been holding a sign that read, “Justice for Iyad”, a reference to an autistic Palestinian man, Iyad Halak, who was shot dead by Israeli police in Jerusalem last month. When Halak’s family complained that his killing was unlawful, authorities told them all the security cameras in the area were not recording footage.

“The corruption in Israel is not only Netanyahu’s corruption. The corruption is also systemic,” said Givati. “The systemic corruption is one of the things that has allowed us to occupy the Palestinians in the West Bank for so many years, and disregard their human rights.”

Four police officers grabbed Givati on Thursday, he said. They drove him and several other detainees to a police station, where they were interrogated. “They asked me very generic questions, except one when they said: ‘Ori, are you from the left wing or from the right wing’?. I was shocked. I didn’t see any reason why I would be asked this question in a democratic country. I refused to answer.”

Having also declined to sign a police order banning him from Jerusalem for two weeks, Givati was taken to court on Friday morning. A prosecutor attempted to argue he was lying on the road to block officers and resisted arrest, he said. But Givati had a video showing him merely standing there. He was released.

Anti-Netanyahu rallies have been held for months, but they have mostly focused on his trial, which began in May. The prime minister is alleged to have accepted hundreds of thousands of pounds in luxury gifts from billionaire friends and intervened in media legislation in exchange for favourable news coverage.

The first serving Israeli leader to go on trial, Netanyahu has denied any wrongdoing, saying that he is the victim of a political witch-hunt. He and his ruling Likud party have also painted some protesters as destructive anarchists.

In March, Netanyahu’s government imposed a swift coronavirus lockdown, a move that was credited with reducing daily infections to single digits. However, health officials say the economy was reopened too hastily in May and without necessary steps taken to control the pandemic.

Now, the country of 9 million people has reported almost 60,000 coronavirus cases. Even though it has managed to keep the death toll relatively low at 448 deaths, last week the number of confirmed infections rose above 2,000 per day.

Public frustration has increased with the new wave of cases, especially after the government said a week ago that it had been forced to reimpose some lockdown measures, including closing gyms, banning indoor dining at restaurants and stringent weekend shutdowns.

As the effects of the pandemic bite, the anti-Netanyahu movement has welcomed new faces. Amotz Tokatly, a 41-year-old who works in the club business in Tel Aviv, said members of the city’s cultural scene had been sending buses to the Jerusalem protests up to three times a week. “Business in the nightlife culture went from 100% to 0% in one day. We are living from our savings,” he said.

Another protester, Shery Lever, 25, a film makeup artist, said it was only after she saw the crowds grow in size that she had decided to come. “I have to say I am sorry I woke up late … it is better late than never,” she said. “The state broke the agreement, written and unwritten, with its citizens. I was educated to give to the country, to serve in the army, to pay taxes. I did everything I was asked, but the contract was broken, so enough. We are not violent and we are not anarchists, but we stopped being ‘good children’.”

Unemployment has risen above 20%, and aid packages have been slow to roll out. Netanyahu said this month he intended to give cash handouts to all Israelis but the proposal was swiftly criticised as impractical. One Israeli columnist slammed the plan as the equivalent of “handing out bribes to the masses”.

On Wednesday, Israel’s parliament, the Knesset, passed a law granting the government extra powers to declare a state of emergency, further angering the protesters.

Einav Schiff, a commentator for the country’s top-selling newspaper, Yedioth Ahronoth, said it was not clear whether the anti-Netanyahu movement was “a full-fledged earthquake” or “merely a tremor that will ultimately pass”. While the protests are visually striking, Likud retains significant support across the country, albeit damaged. Smaller pro-Netanyahu gatherings have been held in Jerusalem.

Schiff’s paper asked 500 people between the ages of 20 and 35 if they thought the government was out of touch, and 78% said it was. Around 60% also supported the protests.

The numbers reflected trends that are bubbling beneath the surface, said Schiff. “Things can’t go on like this.”