Navalny’s wife among more than 3,800 arrested in Russia-wide protests 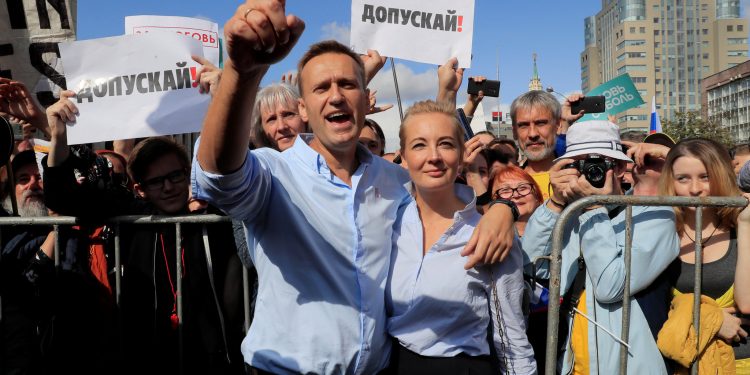 The unsanctioned protests drew tens of thousands of Russians to the streets, defying threats of arrest and the freezing temperatures in many cities. The demonstrations marked the second week-end of mass protests, in which the protesters demanded Navalny’s release from prison and the resignation of Russia’s President Vladimir Putin.

The police cracked down on the protest, randomly picking up people and putting them in police buses. A large group of protesters in Moscow clashed with a police phalanx on their way to Matrosskaya Tishina prison, where Navalny is being held.

Yulia Navalnaya was among the more than 1,000 people arrested in Moscow, having joined the protest after posting her intention to do so on social media. “If we keep silent, they will come after any of us tomorrow,” she said

Navalny was arrested after arriving in Moscow from Germany on 17 January, for allegedly breaching the terms of his suspended sentence, which had been handed down in an embezzlement trial that had been dismissed as political by the European Court of Human Rights. Navalny spent some six months in Germany recovering from being poisoned by a substance administered in Russia, which independent laboratories identified as a derivative of the Soviet-era Novichok nerve agent.

Two days after his arrest, Navalny’s anti-corruption NGO released a two-hour video claiming that a luxurious Black Sea palace was actually used and owned by President Putin, had been paid for in bribes by a close cadre of his associates, running the country’s largest financial and energy companies.

The EU Council of Foreign Affairs condemned last week’s brutal crackdown on the first wave of protests and called for Navalny’s release but stopped short of calling for expansion of economic sanctions against Russia. EU High Representative Josep Borrell is scheduled to visit Moscow on Thursday, where he is expected to discuss the Navalny arrest and the treatment of protesters with his Russian counterpart, Sergei Lavrov.