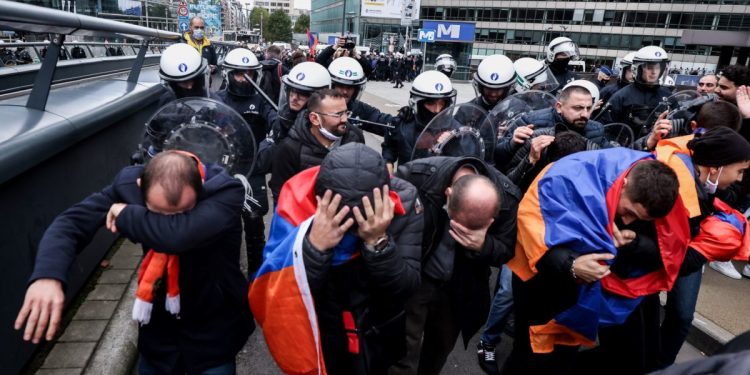 Brussels, (Brussels Morning) NATO Secretary General Jens Stoltenberg met with Armenia’s President Armen Sarkissian on Wednesday and expressed concern over ceasefire violations in the Nagorno-Karabakh region, which have resulted in casualties, according to a NATO statement.

Stoltenberg pointed out that both Armenia and Azerbaijan have been NATO partners for more than 25 years and stressed the importance of ending hostilities and finding a peaceful solution. He called for de-escalation and respect for the ceasefire, adding that targeting of civilians is unacceptable and must stop.

Armenia and Azerbaijan should return to the negotiating table, Stoltenberg urged, noting that efforts by the Organisation for Security and Co-operation in Europe (OSCE) Minsk Group co-chairs remain key to achieving a sustainable political solution.

Armenia has proven itself a reliable NATO partner, President Sarkissian stated, pointing out how his country has been helping the NATO missions in Kosovo and Afghanistan in the fight against Islamic terrorists. He echoed Stoltenberg’s sentiment that attacks against civilians are unacceptable, and, likewise, stressing the importance of finding a peaceful solution to the Nagorno-Karabakh conflict.

Sarkissian said Armenia appreciated the efforts being made by the Minsk Group co-chairs France, Russia and the US, and their respective leaders, singling out Russian President Vladimir Putin and Russian Minister of Foreign Affairs Sergey Lavrov for special praise. He noted that many analysts have concluded that the conflict is no longer just between the unrecognized Nagorno-Karabakh Republic and Azerbaijan – that a third party is now involved.

Turkey has supported Azerbaijan politically, diplomatically and militarily, and now according to Sarkissian, it has brought Islamic terrorists to the area. Since Turkey is a NATO member, it was his belief that if Ankara were to stop fanning the flames of conflict and instead contributed to finding a peaceful solution, a ceasefire could be agreed and negotiations restarted. Sarkissian indicated he was confident that a peaceful solution to the Nagorno-Karabakh conflict could be found under the auspices of the OSCE Minsk Group.