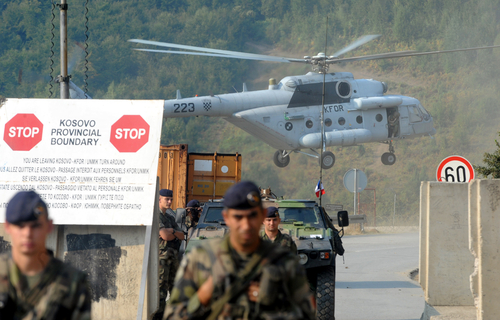 Brussels (Brussels Morning) NATO leadership has addressed Serbian concerns about the deployment of a Croatian contingent in Kosovo, with reassurances that the troops will be bound by exactly the same rules as all other alliance troops participating in the KFOR peacekeeping mission in the country, Reuters reports.

“All troops provided by NATO allies and partner countries to our operation in Kosovo operate under … a well established framework, which is set out by the UN resolution 1244”, Stoltenberg told the press after the meeting.

After meeting with Stoltenberg, Vučić said the session at NATO Headquarters in Brussels had been reassuring. “Everything that has been done so far under the mandate of the United Nations and done by NATO forces was pretty much supported by all sides, and hopefully that will remain so”, he  said.

Kosovo, an Albanian-dominated province of Serbia, declared independence in 2008, nearly a decade after NATO air strikes stopped a counter-insurgency campaign by Serbian forces. Kosovo’s status continues to be a disputed point, even among EU countries, with some – Spain, Cyprus and Greece, for example – refusing to recognise Kosovo as an independent state.

During the 1990s conflicts in the Balkans that marked the breakup of Yugoslavia, Serbian insurgents supported by Belgrade forces occupied large parts of Croatia and Bosnia and Herzegovina, leading to years of bitter fighting between Croatian and Serbian forces. This wartime rivalry is the primary reason Vučić expressed concerns over Croatia, today a NATO member, sending its forces to what it officially perceives to be its territory.