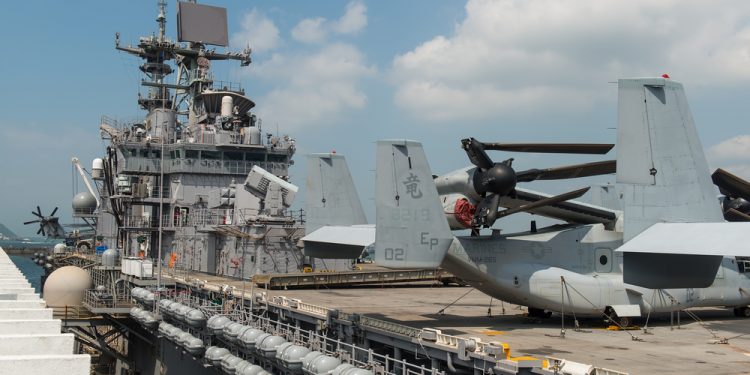 The U.S. amphibious assault ship USS Bonhomme Richard pulled in Hong Kong waters on Sept 18,2013 to get replenishment.Commissioned in 1998, the 40,500-ton vessel.

Brussels (Brussels Morning) The report commissioned by NATO points to China as a potential threat to the EU and the US, and urges member countries to “increase capacity to anticipate and react to Chinese activities that undermine allies’ security,” SCMP reports yesterday, Wednesday.

The report presented to NATO foreign ministers was drawn up by 10 independent experts picked by NATO Secretary General Jens Stoltenberg, who warn that China has showed preparedness “to use force against its neighbours as well as economic coercion and intimidatory diplomacy well beyond the Indo-Pacific region.”

It warns that China is modernising its military rapidly and calls for a partnership with India, which is butting heads with China in South Asia. In addition to India, the report calls for strengthening cooperation with Australia, Japan, New Zealand and South Korea.

In the longer term, the report notes, China is likely to project its military power globally, which is why NATO members must be able to provide protection to allies. Authors of the report call for a significant increase in the amount of resources dedicated to addressing China-related security challenges and assessing the implications of China’s technological development.

NATO should encourage China to adopt an arms control program, the report notes, with the aim of avoiding a possible arms race in Asia and beyond. Authors point out that China does not present an immediate military threat on the scale of Russia, but it is strengthening ties with Russia, expanding its reach and modernising its military.

They predict that China will challenge NATO’s ability to protect sensitive infrastructure and sectors of the economy in the coming decade, stressing the importance of maintaining cohesion in bilateral engagements with China and directing criticism towards Chinese authorities rather than the country as a whole.

As far as Russia goes, the report urges NATO to remain open to the possibility of peaceful coexistence as well as show unity in responses to hostile activities.

The report calls on the military alliance to join the fight against climate change, pandemics in the future and terrorism, Reuters writes. At the same time, NATO must adapt to the current strategic environment, it stressed, characterised by an aggressive Russia and the rise of China.

Authors stress the importance of finding a way to prevent individual members from vetoing policy decisions, reminding that Hungary prevented strengthening cooperation with Ukraine and Turkey did the same with Israel.