NATO monitors as tensions rise between Serbia and Kosovo 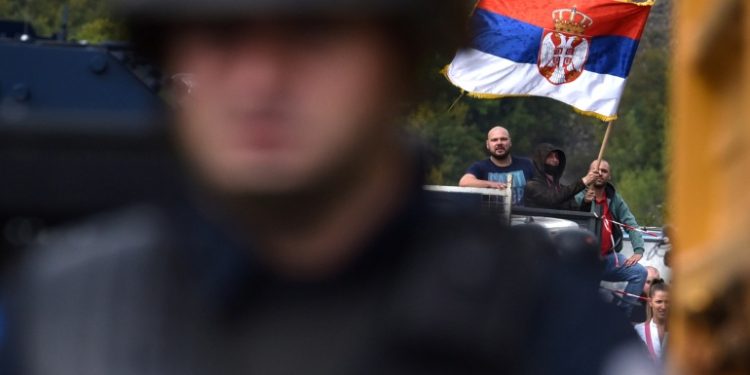 Brussels (Brussels Morning) NATO forces are monitoring the situation on the border between Serbia and Kosovo as tensions between the countries rise.

The NATO-led Kosovo Force (KFOR) notes that it has stepped up patrols on Kosovo’s northern border and that it is keeping a close eye on developments, DW reported on Monday.

Relations between Serbia and Kosovo have reached their lowest point in years because of disagreements over recognition of car licence plates.

Serbia refuses to recognise Kosovo and therefore does not recognise the number plates on cars from Kosova. This means that drivers from Kosovo are required to replace their plates with temporary ones bought in Serbia if they wish to drive through the country.

Kosovo has responded in kind, requiring drivers from Serbia to buy temporary licence plates while in the country. The plates are good for two months only and cost five euro.

Ethnic Serbs in Kosovo protested against the government’s decision on number plates last week and Serbia deployed armoured vehicles near the border. As part of the protests, they blocked roads and two border crossings.

NATO stressed that is was working “to ensure a safe and secure environment and freedom of movement for all communities.” It used helicopters over the last two weeks to keep an eye on developments.

On Monday, the US Embassy in Belgrade noted that US and Canadian officials had visited the two border crossings “to gain a better understanding of the situation” and added that “KFOR was on site as a stabilising factor.”

EU spokesman Peter Stano stated that the situation at the border was calm on Monday, while noting that “there are a lot of diplomatic activities going on now both in Brussels and on the ground.”

Over the weekend, Russia’s Ambassador to Serbia visited military bases near the border accompanied by the Serbian Minister of Defence, Nebojša Stefanović.

Serbia’s President Aleksandar Vučić described Kosovo’s deployment of troops on the border as a “criminal action”, saying he does not want to return to talks before Kosovo withdraws the forces from the border.