NATO interceptions of Russian military jets slightly up in 2020 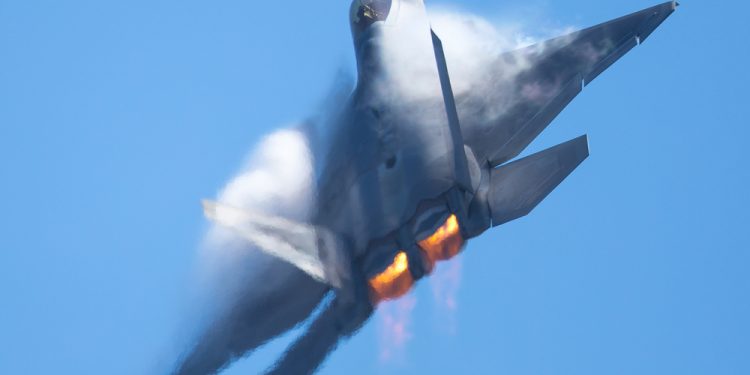 F-22 Raptor in a high-G maneuver, with afterburners on, and condensation clouds and streaks around the plane.

Brussels (Brussels Morning) NATO air forces across Europe scrambled more than 400 times in 2020 to intercept unknown and unidentified aircraft approaching their airspace, the Alliance reported on Monday in a press release.

According to the official NATO tally, almost 90% of all air intercept missions – around 350 – were in response to flights by Russian military aircraft, which represents a moderate increase compared to 2019.

Most intercepts without incident

Many of the intercepts are because of flights to the Russian enclave of Kaliningrad, nestled between Poland and Lithuania. A common NATO complaint is that Russian military aircraft regularly fly with their transponders off, and without submitting flight plans. This practice makes them invisible to civilian air traffic controllers, and poses a risk to civilian airlines.

In most cases, NATO intercepts occur without incident, since Alliance planes take off to identify the approaching aircraft and then escort it out of the area. However, NATO accused a Russian fighter jet of a “significant violation” in August this year, when it took off from Kaliningrad and followed a US B-52 bomber into Danish airspace. The Kremlin maintained its aircraft never left international airspace.

The Alliance operates some 40 air surveillance radars and reporting hubs across Europe, with some 60 NATO jets on duty 24/7 to serve as a quick-response force in the event that aircraft experience an emergency or distress or if they defy international flying rules near Alliance airspace.

Since the three countries joined the Alliance in 2004, NATO has operated a Baltic Air Policing mission for Estonia, Latvia and Lithuania. It also provides Air Policing coverage for Western Balkans allies Albania, Slovenia and Montenegro that lack interception-capable aircraft and is discussing expanding this coverage to Northern Macedonia, NATO’s newest member.