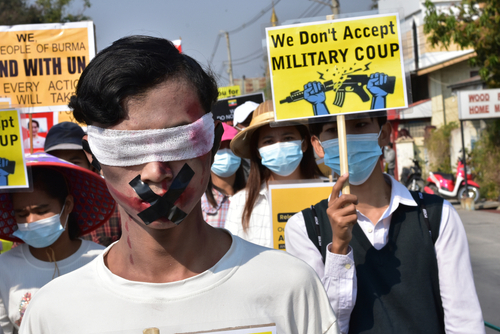 Brussels (Brussels Morning) A journalist from the Democratic Voice of Burma (DVB) in Myanmar was sentenced to three years in jail on 12 May after being held in custody since early March on charges related to coverage of the protests against the country’s military junta.

Min Nyo, 51, was arrested on March 3 while reporting from the town of Pyay, where protests had escalated following the military coup that ousted Myanmar’s leader Aung San Suu Kyi on 1 February.

According to a statement from DVB, a media group that has been banned since 8 March by the Myanmar junta, Nyo was “brutally beaten” by police at the time of his arrest.

Since being detained, Min Nyo has been prevented from seeing his wife and two children although he was allowed to see a lawyer, Nyomee Moe, his wife, told the Associated Press.

“It is inhumane to be beaten and arrested. He never violated journalistic ethics. That is why I want to say that there is no justice in Myanmar”, she said.

A recently revised provision in the Myanmar penal code makes it an offence punishable by up to three years in prison to “hinder, disturb, damage the motivation, discipline, health and conduct” of soldiers and civil servants or cause hatred, disobedience or disloyalty toward the military and the government.

Myanmar’s military has repealed the licenses of several media outlets, including DVB, since the February coup.

Human rights’ groups and journalists’ associations have voiced their concern about the systemic flouting of international law and have repeatedly called on the junta to halt the violence and repression directed at journalists and protestors.

Amnesty International condemned Nyo’s violent conviction, denouncing the “ruthless military authorities” that are “determined to crush dissent” through the silencing of those attempting to expose their crimes.

“Since the 1 February coup, scores of journalists have been arbitrarily detained, threatened, arrested and even shot at. Journalism in Myanmar has effectively been criminalized and DVB, a publication which began in exile, has been forced underground once more”, Amnesty warned.

On 9 May, three DVB reporters managed to flee the country and cross into northern Thailand, where they were arrested for illegal entry.

The Committee to Protect Journalists (CPJ) called on Thailand to “refrain from deporting” the three reporters and urged Bangkok to uphold the “country’s proud history as a sanctuary” for journalists fleeing military repression in Myanmar.

The EU has imposed sanctions against some 35 individuals identified as among the leaders of the military junta and the businesses that they control.