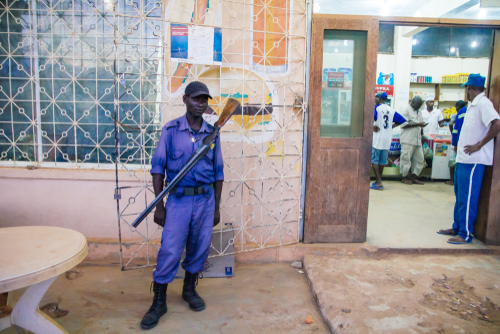 Brussels (Brussels Morning) More than a 1,000 survivors of a deadly attack on Palma, in northern Mozambique, eventually managed to flee by ferryboat and reach safety in the port of Pemba on 31 March. Escaping the 24 March Daesh attack on the strategically-located town, the men, women and children fled to the bush where they hid for days before embarking on the ferry and a 430 km voyage to sanctuary further south.

Conflict has been escalating in the Palma area, where Mozambique’s billion-dollar gas infrastructure is located. Thousands have been forced to flee, while the government has confirmed dozens of deaths, according to Reuters. However, the exact toll in the remote northern town remains as yet unknown.

Most means of communication were severed after the attack that was launched a week ago. Calls to government and security officials in the area went unanswered on 1 April.

During the assault, some 200 people took refuge in the Amarula hotel, many of them workers of various nationalities linked to companies working on the natural gas project led by the French oil company Total.

Portugal, current holders of the Presidency of the Council, has announced it will send soldiers to the region to help train security forces, the aim being to get military on the ground and fully operational this month.

Currently, there are conflicting reports circulating as to who exactly is in control in Palma.

The Daesh proclaimed that they are in control of the region through the jihadist movement’s official news source, Amaq. However, RTP, the Portuguese broadcaster, which has been following military operations on the ground in Palma, reports differently.

According to RTP reporting, the Mozambican military has ensured that Palma “is not in the hands of the jihadists” and that control is being restored in the area despite “pockets of resistance”. On 30 March, an RTP broadcast assured that “the population will soon be able to return”.

Asked to comment on the ongoing situation, French analyst and historian Michel Cahen blamed France and urged caution regarding foreign military intervention. He compared the situation with that in Mali, warning that “it would not be good to produce a second Mali in Mozambique”.

The director emeritus of the Centre National de la Recherche Scientifique, putting it bluntly said “France’s interest is Total”. The French have geopolitical interests in the area and are concerned with maritime security, he added. In his view, as reported by the Club of Mozambique, “foreign military intervention in the area will not solve the problem” .

On 30 March, the Presidents of Zimbabwe and Botswana met in Harare reflecting efforts by Southern African states to craft a response to the deteriorating security situation in Mozambique.

The regional bloc is said to be preparing a military intervention in Mozambique’s northern Cabo Delgado region, where militant violence has been raging since 2017, according to reporting in the Zimbabwe Mail.

Further assistance from the EU was announced by the Portugal’s Minister of Foreign Affairs, Augusto Santos Silva, who on 30 March gave assurances that the EU is now preparing an aid mission to support Mozambique in the fight against terrorism.

According to the Portuguese newspaper Público , Santos Silva outlined the mission’s essential goals as including “strategic clarity”, “intra-European cooperation” involving the EU and NATO along with other important partners such as the UK and “partners from other continents”. Special attention would be paid to coordination and the interoperability of forces and resources, to ensure greater efficiency in the management of resources and use of taxpayer money, he declared.