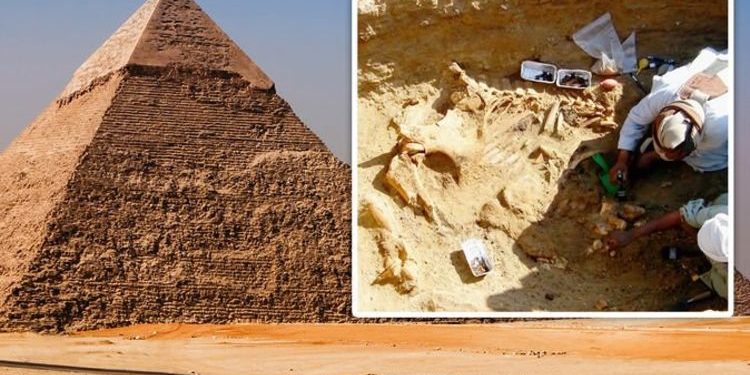 EGYPT archaeologists have made a stunning breakthrough in understanding the ancient civilisation that once inhabited the region up to 6,000 years ago, in what one expert dubbed “the most exciting find made,” Express.co.uk can reveal.

Hierakonpolis, or “City of the Hawk,” is the Greek name for the modern city of Kom el-Ahmar, which became the religious and political capital of Upper Egypt at the end of the prehistoric era, between 3200BC and 2686BC, but the earliest settlement may date back more than 6,000 years ago. The first evidence of its ruins were excavated towards the end of the 19th century by the English archaeologists James Quibell and Frederick Green who theorised the city had at least 5,000 and possibly as many as 10,000 inhabitants at its height. Since 2001, Dr Renee Friedman has led the efforts to learn more about Hierakonpolis, with her recent developments being documented in Channel 5’s new series: ‘Ancient Mysteries: Animals of Egypt’s Underworld’.

But she revealed how experts discovered this vast area – estimated to be around three miles squared – was also hiding a number of bizarre burials that left experts scratching their heads.

Speaking to Express.co.uk, Dr Friedman said: “Hierakonpolis is a very important site for the beginning of the Egyptian civilisation.

“It has been known to be an important site for over 100 years, very important artefacts were found there in 1898.

“Then in the Seventies, we went back to the site to look around some more.

“We found this cemetery and began excavating it, but not only did we find human burials, we found these very strange animals that took us some time to figure out what they were.”

Dr Friedman went on to detail how the team plucked a treasure trove of ancient animal remains from burial tombs.

She added: “You don’t expect to find seven baboons in a grave and a wild cat and a hippopotamus buried along with humans.

“We began again in the Nineties, and as we excavated, we found more and more animals.

Remarkably, Dr Friedman revealed to Express.co.uk that she now believes the ancient civilisation captured, cared for and showed off these exotic animals in what could be evidence of the world’s first-ever zoo.

She said: “Although all these animals have obviously been buried, we see that they sustained injuries that were healed and had to be healed under human care.

“We think they were in captivity for at least six weeks for the injuries to heal, but how much beyond that I can’t say.

“So these animals were kept on-site alive, I don’t think the whole point was to actually bury them, I think it was to show them off.”

Dr Friedman believes keeping the animals in captivity was a show of power to the ancient Egyptians.

She continued: “To have these animals would prove that the ruler of the site was very wealthy and powerful – killing animals was easy, but actually bringing them back alive is a lot harder – imagine an elephant, leopard or lion.

“Keeping it alive is another skill too, we have a leopard, wild cattle, two elephants, hippopotami, crocodiles – all these animals represent power.

“These are animals they were afraid of, that caused chaos and by capturing them they showed control over them.”

During the series, which aired last week, narrator Mark Bazeley explained why this ancient settlement still gives archaeologists a huge opportunity to peek into a part of history scarcely documented.

He stated: “The zoo from the dawn of history played an incredible role in shaping the Egyptian civilisation.

“But Hierakonpolis has only just begun to reveal all of its secrets.

“Renee Friedman’s team have only excavated 20 percent of the area and the finds just keep on coming.

“Her findings are redefining everything scholars thought they knew about Egypt in the time before the pharaohs.”

Dr Friedman even found some new evidence while the cameras were rolling.

She said: “So here, eroding outside of this tomb, is a baboon bone.

“This is probably the elbow of one of the seven that were buried here.

“Because these tombs were heavily plundered repeatedly, you find this explosion of bones around you and every so often one decides to reappear just like this.”

She explained: “The zoo is one of the most exciting finds that has been made in Egypt because it has all these animals there that were kept, in captivity, as such a core part of religious belief and had a major role to play in Egyptian ritual.

Catch up on Ancient Mysteries: Animals of Egypt’s Underworld on My5 now.