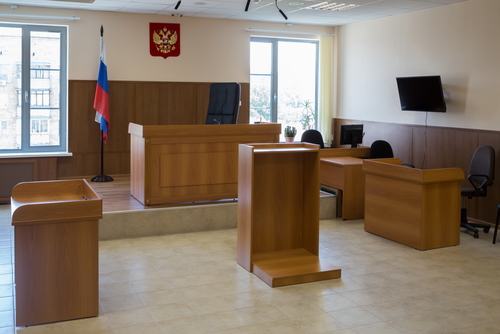 MOSCOW, RUSSIA - JUL 1, 2015: Court of law hall with wooden furniture, flag and screen on the wall.

Brussels (Brussels Morning) A Moscow court has outlawed several organisations with ties to jailed Kremlin critic Alexei Navalny, in effect preventing his allies from taking part in elections, and likely exacerbating Russia’s already strained relations with the EU and the US.

The Wednesday ruling is seen as a devastating blow to the independent Russian opposition. Navalny spent years constructing a vast political network with the aim of exposing the corruption of Russia’s ruling elites, and to provide support to opposition candidates deemed best qualified to unseat incumbent politicians.

The case was initiated by the office of Moscow’s top prosecutor, who accused Navalny and his allies of attempting to instigate a revolution by destabilising the current social and political situation within Russia.

Navalny’s Anti-Corruption Foundation NGO and his regional campaign headquarters were declared to be “extremist” and ordered by the court to cease operations immediately.

Members of organisations so designated who persist with their activities can face jail time and the seizure of their assets. These measures can, in effect, prevent them from organising future mass protests such as those held when Navalny was first jailed this year. In a one-two punch, Russia’s President Vladimir Putin also signed a law last week which bars members of “extremist” organisations from running for office.

In a pre-prepared message posted on Navalny’s Instagram account, the opposition leader urged his supporters to remain upbeat. “We are not going anywhere”, it read. “We’ll digest this, sort things out, change, and evolve. We’ll adapt. We won’t step back from our aims and ideas. This is our country and we do not have another one”.
The court decision is likely to raise tensions further with the EU and US, ahead of the planned high-level summit between Putin and US President Joe Biden scheduled for Wednesday in Geneva. Both the EU and the US have repeatedly called on Moscow to release Navalny, jailed on embezzlement charges, which the European Court of Human Rights dismissed as political.