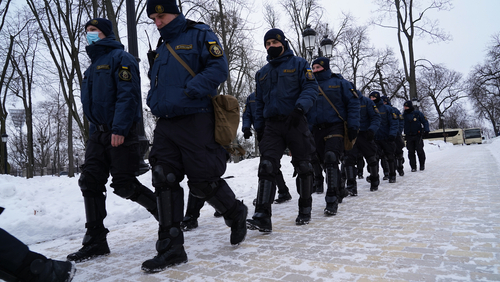 Brussels (Brussels Morning) The Kremlin has expressed concern over the rising violence in eastern Ukraine and called on France and Germany to use their diplomatic influence to ensure the simmering conflict in the country does not cross a red line.

The two EU member states participated in the previous peace talks between Ukraine and Russia in the so-called Normandy format, which brought about a ceasefire on 27 July last year, after more than 14,000 people were killed in fighting between Ukrainian troops and Russian-backed rebels since 2014.

The brunt of the fighting ended with a truce signed in Minsk in 2015, though sporadic clashes have continued in the Donbass region ever since, resulting in frequent civilian deaths or casualties among combatants. Clashes reportedly intensified in recent weeks, after a relatively peaceful period following the July ceasefire.

Talking to reporters on Thursday, Russian government spokesman Dmitry Peskov said Moscow was seriously concerned by an uptick in violence on the contact line between separatists and the Ukrainian forces. He accused the latter of breaching the ceasefire by illegal shelling.

Peskov noted that Moscow was, in turn, using its influence with the pro-Russian separatists to ease the tensions on their end. “We also hope all our partners in the … (Normandy) quartet will pay attention to the growing tension on the contact line and will use their influence to prevent this escalation from crossing a dangerous line”, Peskov said.

Russian involvement in the Ukraine conflict continues to be one of the sore points between Moscow and Brussels, with the EU insisting that Moscow must fulfill its obligations under terms of the 2015 Minsk agreement, one of which calls for the normalisation of mutual relations.