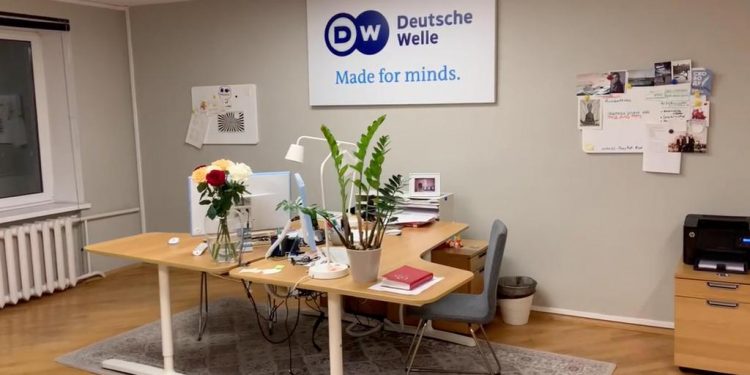 Belgium (Brussels Morning Newspaper) Russia announced on Thursday it will be shutting down the Moscow offices of the German broadcaster Deutsche Welle, and that it will revoke the accreditations of all of the broadcaster’s journalists in the country.

The move comes in apparent retaliation for the German media regulator’s ban imposed on Russian State-owned broadcaster RT, which was barred from broadcasting its German language channel in Germany.

RT, formerly called Russia Today, is a Kremlin-funded broadcaster with television channels and websites in several languages. While it presents itself as an independent news channel, its critics point out it is acting as a mouthpiece of the Russian government, in addition to spreading dangerous misinformation and conspiracy theories.

Deutsche Welle, on the other side, is a German public service broadcaster that maintains editorial independence despite being funded by the German taxpayers, with both the broadcaster and the German government insisting the latter has no influence over its content.

RT, classified by the German security agencies as a propaganda arm of the Russian state, attempted to circumvent the need to possess a German broadcast licence, claiming it was within its legal right to broadcast live in Germany with a Serbian-issued broadcast licence.

German regulators ruled that the broadcaster’s local operation was headquartered in Berlin, together with its studio, and that this meant that it came under Germany’s jurisdiction. The German regulator’s move came in mid-December, just a day after Google permanently banned RT’s third German YouTube channel in a row, for attempting to circumvent an earlier ban for distributing coronavirus misinformation.

Apparently responding to the German ban, the Russian government first announced it would label Deutsche Welle’s Russian service as a “foreign agent”, before ultimately announcing on Thursday that the broadcaster’s offices would be closed, and its journalists stripped of their accreditations.
DW Director General Peter Limbourg reacted to the move by accusing Moscow of a disproportionate response. “We had been expecting some measures by the Russian side, but I think this is a total overreaction from the Russian government,” Limbourg said, indicating that the German broadcaster would take legal measures in an attempt to overturn the Russian decision.