More than 3000 people arrested in nationwide protests in Russia 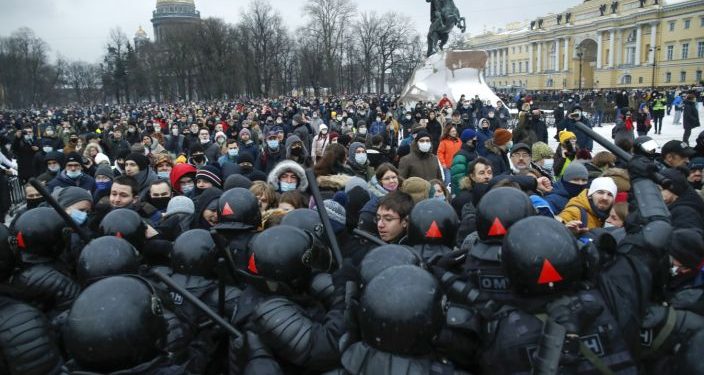 People clash with police during a protest against the jailing of opposition leader Alexei Navalny in St.Petersburg, Russia, Saturday, Jan. 23, 2021.

Brussels (Brussels Morning) More than 3,000 people were arrested on Saturday in some 90 cities in Russia, where tens of thousands of protesters were demanding the release of opposition figure Alexei Navalny from prison, AP reported.

Prominent Kremlin critic Navalny was arrested last weekend upon his return to Russia, after spending several months in Germany, where he had been recovering since August of last year from the effects of poisoning believed to have been administered prior to his boarding a Moscow-bound Russian domestic in August last year.

The authorities apprehended Navalny on landing back in Moscow from Germany last week, and charged him with having violated terms of a suspended sentence on grounds that he had failed to check-in with Russian prison authorities during his recuperation while away.

After his latest arrest, associates of Navalny issued a nearly two-hour video detailing a Black Sea palace supposedly belonging to Russia’s President Putin. It featured details of the apparently convoluted manner in which the property was funded, allegedly involving bribes from Russia’s political and business elite. The video included an appeal for mass protests against Putin, scheduled for Saturday.

The authorities withheld permission for the protest, citing COVID-19 concerns, and banned any promotion of the protests, which were planned to take place the city squares of most cities in Russia.

The Russian Foreign Ministry accused the US Embassy in Moscow of “publishing itineraries of protests”, after it listed planned locations and routes for all major protests in an advisory urging US citizens urging to avoid the locations, if possible.

Despite the protests being unauthorised and threats of arrest, tens of thousands of people across the country defied the official injunction and turned out, undeterred by freezing cold that reached as low as minus 50 degrees Celsius in Yakutsk. According to Reuters, at least 40,000 people attended the central protest in Moscow.

Demonstrators clashed with the police in Moscow, with hundreds of people being dragged off to be placed in police buses and detention trucks. At least 1,400 people were arrested in Moscow alone, including Navalny’s wife Yulia, while several of his associates were arrested earlier for encouraging people to attend the protests.

Navalny himself urged people to turn out in large numbers, an appeal sent from where he is being detained pending a trial to determine if his suspended sentence on charges of embezzlement can be thrown out and replaced by a prison sentence. The European Court of Human Rights has ruled those original charges to be politically motivated. In a recorded message, Navalny made a point of putting on record that he has “no desire to commit suicide” and that his health is perfect, a precautionary move lest something happens to him in prison.

After Navalny’s poisoning in August five independent laboratories confirmed that he was most likely poisoned by the illegal Novichok nerve agent produced in Russia. Western intelligence agencies concluded it was most likely that he had been poisoned by operatives of the Russian FSB intelligence agency. The EU then expanded its ongoing economic sanctions against Russia and individuals suspected to be tied to the poisoning.

Following his arrest on his return home, European Council head Charles Michel demanded Navalny’s immediate release in a phone call to President Putin. “I reiterated that the EU is united in its condemnation of Alexei Navalny’s detention,” Michel stated on Twitter on Friday.

An overwhelming majority of MEPs condemned Navalny’s imprisonment in a resolution on Thursday that urged a “significant strengthening of sanctions against Russia”, and called on the Russian authorities to immediately release him. The EU Foreign Affairs Council is scheduled to discuss Navalny’s arrest when it meets today.