More than 100 reported killed in Myanmar on Saturday 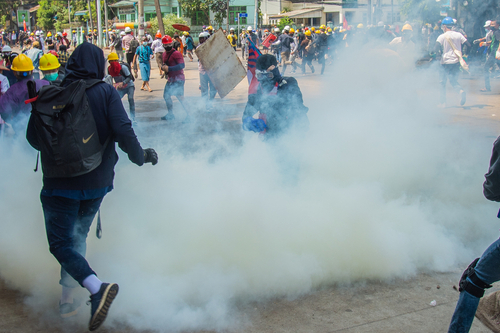 Police cracked down on the crowd with tear gas protesters in Yangon, Myanmar on 3 March 2021.

Brussels (Brussels Morning) At least 114 people were reportedly killed by security forces in Myanmar on Saturday according to Reuters.

UN Special Rapporteur Tom Andrews declared that an international response was now a matter of urgency, as he called for the military junta to be placed under sanctions.

“Words of condemnation or concern are frankly ringing hollow to the people of Myanmar while the military junta commits mass murder against them”, he stated.

The US Ambassador to Myanmar, Thomas Vajda, condemned the bloodshed, pointing out that “Myanmar’s people have spoken clearly: they do not want to live under military rule”.

The EU delegation to Myanmar denounced Saturday’s violence, stressing that it would “forever stay engraved as a day of terror and dishonour.”

Military leaders from some ten countries decried the violence by security forces in Myanmar, noting that a professional military “is responsible for protecting – not harming – the people it serves”.

According to diplomats, Bangladesh, China, India, Laos, Pakistan, Russia, Thailand and Vietnam sent representatives to attend the Armed Forces Day parade in Myanmar, but Russia was the only country to send a minister.

The support of China and Russia is important for the junta, given that both are permanent representatives of the UN Security Council and can thwart potential UN action against Myanmar with their veto powers.

The junta leadership is claiming the military assumed power because last November’s parliamentary elections were fraudulent, a claim the election commission denies.

Prime Minister Aung San Suu Kyi and many of her party colleagues remain in detention at undisclosed locations.

Junta leader Min Aung Hlaing speaking at the Armed Forces Day parade pledged that the security forces would protect the people and democracy.

The violence on Saturday saw severe fighting between security forces and ethnic armed groups. According to one civil society group, military jets killied at least three people in an attack on a Karen minority-controlled village.