Mixed couples are about more risk of Divorce: ‘If you can’t give and take it stops’ 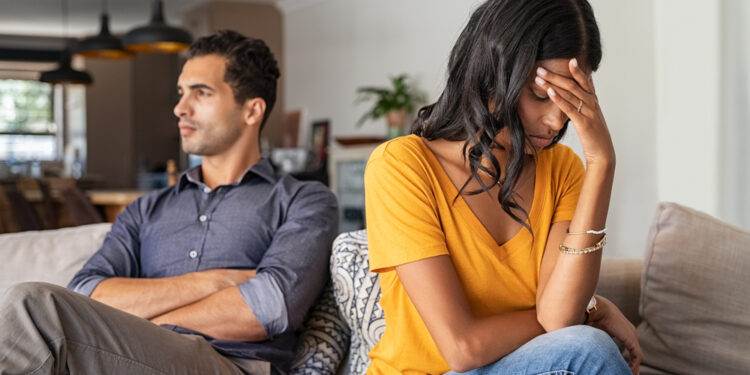 Brussels, (Brussels Morning)- Couples from different backgrounds have a higher risk of breaking up. This is apparent from research by the Knowledge Center for Family Sciences at Odisee University of Applied Sciences. These couples would be more vulnerable, the researchers say. BRUZZ spoke to three mixed couples. “If you can’t give and take, it stops.”

Why mixed couples break up more quickly has not been specifically investigated. The researchers distilled two hypotheses. For example, people who live together from different backgrounds would come to conflict more quickly and socio-economic factors play a role. Families with a migration background would have a harder time financially and in terms of housing. BRUZZ spoke to three mixed Brussels couples. Each and every one of them recognizes or recognizes cultural differences, but above all they emphasise what binds them together.

Koen and Virginia: ‘Tolerance is so important. In the past and today’

Koen met his current wife Virginia 22 years ago in the wellness centre he had just founded. He is Belgian, she is from Moldova.

“We got married twenty years ago. In today’s society, this is no longer a must, because the benefits are less great than in the past. But, if you come from another country, and certainly twenty years ago, getting married was an important step towards integration – to be allowed to stay here. You just couldn’t have a girlfriend from another culture and build a life together here without a marriage.

Moldova is Orthodox, so that is in line with Catholicism, maybe there is a little more cinema in the church there. (laughs) But my wife isn’t very religious anyway. For example, she only came to church on the day our children had their communion or confirmation.

The biggest difference between us, and between our cultures, was especially noticeable at the beginning of the relationship. Moldova was a country under construction, with growth. Belgium should have lost its purchasing power. I am also ten years older, and I was used to living with less. But of course she hadn’t fled her country to find herself here in misery.

Belgium felt a bit like Disneyland to her. I understood that: all attractions had to be tried out. Shopping on Avenue Louise, for example. Belgians did not. But for her it was a matter of status. It is often not about how much you have, but how you think about it, and that basis lies in the upbringing. But that is also the case for couples where both partners are of Belgian origin.

Whether a mix of nationalities is the cause of divorce? No, I do not think so. Divorce is also just much easier today, then maybe you will do it easier? In the past this was no easy task: the church, the administration and the reaction of the environment made this difficult. Of course you shouldn’t stay in a relationship if you can’t be yourself, but tolerance is so important. In the past and today.”

Lieze and Ayub: ‘We mainly have many things that bind us’

Lieze and Ayub have moved from Limburg. When they are not abroad, they live in Brussels. They both have Belgian nationality. He moved from Kenya to Belgium when he was thirteen, and is of Kenyan origin. They met each other when they were seventeen, on New Year’s Eve in a disco and have been together for eleven years.

“Mixed couples are more at risk of divorce? I knew nothing about that! At least we’re still together (laughs) . Sham marriages seem to me to be an explanation for that figure. If you are hopelessly looking for a better future, that is sometimes the only way out because you are not a valid refugee if there is no war raging in your country at the time.

Ayub was thirteen when he moved to Belgium. So he actually grew up partly in Kenya and partly in Belgium. The main difference between us is religion: he is Muslim, I am Christian. We’re not very strict. Good thing, otherwise we wouldn’t even be allowed to date .

Above all, we have many things in common, things that bind us. We are both very family oriented. Something very African is that family is everything, it comes first. I was raised that way too. We also both grew up in a financially precarious situation, so we know and accept that we help family in that area. I do think that can be a point of frustration, if you don’t have that background.

In Kenya you never go forward alone, that is rude. You have to try to get everyone on board. You learn that from your parents. I got a lot from them, so – if I can – I give that back. In Belgium, the efforts of parents are often taken for granted, but you can really give something back.

The role pattern within a family is still fairly old-fashioned in Kenya: the man goes out to work, the woman is a housewife. We don’t see that much in Belgium anymore. I didn’t grow up like that either. Ayub also supports that, for the rest of his family that was a bit strange.

Many people get lost in their love and don’t look further into the future. We waste so much time dating and ‘having fun’ together and then suddenly you are five years later and you have never talked about big things, like for example, wanting to have children. Then you have already invested so much in your relationship and maybe only then you will find stumbling blocks. There are often too many important matters that are discussed too late.

So we were together for about a year when I started getting questions from people if I was going to convert to Islam? I had absolutely no idea where the commotion came from, but I immediately asked him whether he expected that from me. He didn’t, but his mom did, because that hit her very hard, someone who doesn’t share the same beliefs. This is exactly the same with very Christian families, then the following applies: if you want to belong to us, you just have to do this and that.

In the end, there was no immediate pressure to convert because his family still lives in Kenya and we live in Brussels. We also explained that very clearly to his family: if I ever convert, I will do so because I support it myself, not just to please the family. Ayub understands that, and so does his family. If that would have been a problem, if you clash there, then you know that pretty early in your relationship too. Then love can still be so great – if you can’t give and take, it stops there.”

Penny and Youri: ‘I understand that mixed couples have a higher risk of divorce’

Penny and Youri have been together for a year and a half. He is Belgian and has lived in Brussels for thirty years, she is Dutch. They got to know each other on Vossenplein, in front of burger restaurant Broebbeleir.

“We are a bit like Peppi and Kokki. Like ‘toet toot, boing boing’, that characterises our relationship. That’s how we treat each other. We laugh a lot, and sometimes we don’t. Then it clashes a bit, but then we laugh again.

As a Flemish resident of Brussels, Youri doesn’t see many differences between us, actually it’s just an advantage (it’s quiet for a while) Have you heard? Youri shouted that he can only recommend a relationship with a Dutch woman (laughs) .

There are of course differences. For example, the Dutch are very proactive, very enterprising, that’s just part of our culture. I personally see that less in Belgians – luckily Youri does. Also that whole Burgundian mentality: eating, spending money, coming out of the supermarket with a full shopping cart, I don’t do that. I am much more careful, I budget more. To me, that Belgian Burgundian mentality comes across as throwing money out the window. I was raised with the principle: earn first, then spend.

Money is such a strange thing in Belgium. It is really not done here to talk about money. Youri says that has to do with ethics, it’s not polite to just ask for money, or talk about it. While I talk openly, down to the penny, about money with my friends.

At the beginning of our relationship, we had more problems with the differences than we do now. Those discussions in the beginning, you mainly think that you are right. If you then talk again at a later time, the conversation is often more nuanced, you learn to give and take. You respect each other’s customs, you adopt things, you compromise.

I am the child of such a couple who did not work. So I understand that mixed couples have a higher risk of divorce. A lot has to do with upbringing, how you look at the world and how you hold on to it. If you have the same background, you can empathise more easily and you know why someone does something. Fortunately, Youri and I have the same life and we think the same about it.”