Mike Pence shows his worth by reaching the parts Trump cannot 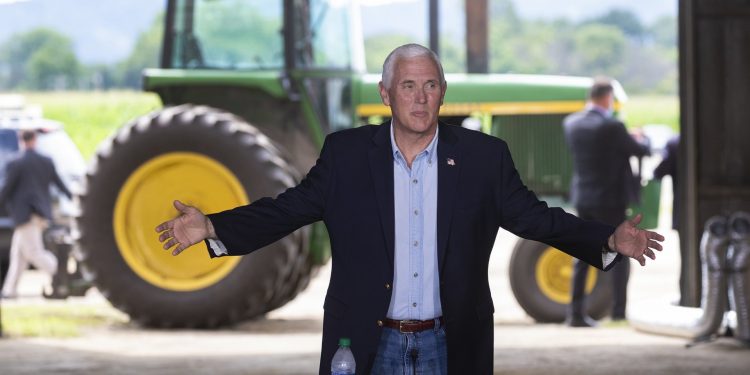 Two green tractors were mounted on the podium. Beneath “Farmers & Ranchers for Trump” signs, the seated audience wore “Trump 2020” campaign regalia. They warmed up with The Best, YMCA and other songs familiar from Donald Trump’s campaign rallies.

But when the headline speaker walked out at the Iowa State Fairgrounds in Des Moines, it was not the US president. Instead his deputy, Mike Pence, wearing an open-collar red checked shirt under his suit jacket, took centre stage and let rip against his new Democratic opposite number, Kamala Harris of California.

“Senator Harris said she would change the dietary guidelines in this country to reduce the amount of red meat Americans can eat,” Pence said, eliciting boos. “Well, I’ve got some red meat for you. We’re not going to let Joe Biden and Kamala Harris cut America’s meat!”

Pence was a crucial bridge to Republicans sceptical of Trump in 2016. With the president enduring miserable poll numbers and starved of the political oxygen of blockbuster campaign rallies, he now arguably has a bigger role than ever to play in shoring up his boss’s socially conservative base – especially white Christian evangelicals, some of whom find their trust in Trump wearing thin.

Pence, 61, has been clocking up air miles to swing states, speaking to gatherings of supporters and blurring the line between governing and election campaigning. In Florida he spoke at a Baptist church about “the importance of life”, pushing a hardline anti-abortion message, and toured a pregnancy centre with his daughter, Charlotte.

Earlier this week he headlined a “Cops for Trump” event and “Latter-day Saints for Trump” coalition launch in Arizona, while his wife, Karen, visited a “military spouse owned business” in Charlotte, North Carolina, to highlight the cause of suicide prevention.

Pence has also been on air, defending the president and scoring partisan points. On Fox News he blamed some of New York’s pandemic death toll on “poor decisions” by the state’s Democratic governor, Andrew Cuomo, while on the Christian Broadcasting Network, he said the supreme court chief justice, John Roberts, had been “a disappointment to conservatives”.

Trump, meanwhile, has been mostly trapped inside the gilded cage of the White House, delivering press briefings in the dog days of summer that have prompted critics to suggest his heart is not in it. Journalist Brian Karem tweeted about one: “Today I saw a man with low energy, befuddled and lumbering.”

Michael D’Antonio, a political author and commentator, said: “The rallies are a big loss because he is a vaudevillian and if he can’t perform, what does he do? He’s such a good showman that it must be killing him to not be out on the campaign trail.”

In a sign of the frustration, the Trump campaign on Friday announced that the president will stage “mini-rallies” in Minnesota, Wisconsin and Arizona as counter-programming to next week’s Democratic national convention. But Pence will also head to Wisconsin on Wednesday, drawing a pointed contrast with Biden, who decided against delivering his acceptance speech there as originally planned.

Pence is expected to continue plugging away in his effort to keep wavering conservatives in line, reminding them that Trump is fundamentally reshaping the federal judiciary with more than 200 appointments so far. And whereas the president’s photo op with a Bible outside a historic Washington DC church in June struck some evangelicals as a crude parody of their faith, Pence – whose trademark line is “I’m a Christian, a conservative and a Republican, in that order,” – is perceived as authentic.

Mike Murphy, a Republican fundraiser and businessman in Pence’s home state of Indiana, said: “He’s still a darling of the evangelical community. The good thing about Pence is that he not only thinks like them but he lives like them. He’s not Trump and I think that’s one of the reasons that he provides some value to Trump.”

Pence helps focus minds not on what Trump says, including his fumbling attempts to quote the Bible, but on what he does. Murphy added: “To the extent that Pence can get out to the right crowds and remind them of the things that Trump has done that have been good for evangelicals, like the conservative judicial appointments, then he just doubles Trump’s reach.

“He doubles the positive media attention, particularly in the midwest and in some of the battleground states, certainly ones like Ohio and Florida. So I think he’s a definite attribute that appeals to a part of the Republican base that maybe Trump doesn’t always appeal to.”

Murphy said: “You probably couldn’t have a more stark contrast between Kamala Harris and Mike Pence. I assume that she will attack him for being pro-life and anti-woman but he’ll be extremely well prepared and calm. Very few people know that Mike Pence was a national debating champion in college and he will not be intimidated.

“He’s not going to attack her personally or call her names or anything like that because that’s not what he does. But he will be formidable and anybody who thinks he’ll be a pushover, because people like to think he’s a sycophant for Trump, will be surprised at his abilities as a debater.”

Nevertheless, many observers are relishing the prospect of Harris, a legal prosecutor who has grilled Trump allies during congressional hearings, putting Pence to the sword.

D’Antonio, whose books include The Shadow President: The Truth About Mike Pence and The Hunting of Hillary: The Forty-Year Campaign to Destroy Hillary Clinton, said: “There’s part of me that wants to say that she would eat Pence alive at the debate. She’s so much better-read and more experienced and more commanding as a personality, but she’ll have the gender issue to navigate.

“To me, she seems far more presidential than Mike. If you were to look at her and say, who could take over, I think people would have much more confidence in her. But I obviously can’t get into the head of the 35% of people who are locked into Trump and never will be dislodged. It’s an amazing thing how people are so committed to him. There’s nothing he can do that would shake them loose.”

Pence is also chair of the White House coronavirus taskforce. This week he led a discussion with state governors and joined Trump in an event focused on reopening schools. Yet with the US death toll above 160,000 and cases topping 5m, he has somehow avoided becoming a lightning rod for criticism and remains in contention for the Republican nomination in 2024.

D’Antonio added: “He’s really good at leaving the room at the right moment and very good at not being noticed. You’ve got to think, for someone to survive with Trump this long, he has got to have incredible antennae. His profile is perfect for Trump’s need right now and I think that Trump would pay a price for dumping him. So the two of them can’t afford a divorce and I’m sure there’s a lot of thought being given to how to use Mike most effectively.”