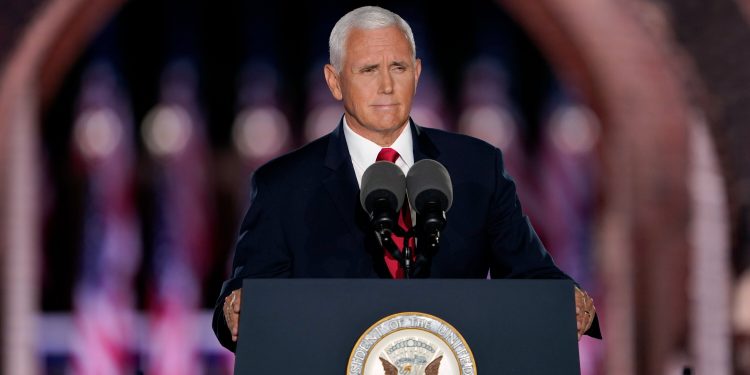 In the shadow of deepening unrest in Wisconsin, Mike Pence warned darkly of the violence and mayhem that would ensue under a Democratic administration during a keynote address on the third night of the Republican national convention on Wednesday.

The vice-president, speaking from Fort McHenry in Baltimore, where the raising of the American flag during the war of 1812 inspired Francis Scott Key to write the poem that would later become The Star-Spangled Banner, echoed several conservative speakers in painting a dystopian portrait of America’s major cities and accusing the Democratic presidential nominee, Joe Biden, of tolerating violence and vandalism.

“The hard truth is you won’t be safe in Joe Biden’s America,” Pence said, after formally accepting his re-nomination to be vice president on a stage bedecked with American flags.

Pence, who leads the White House coronavirus taskforce, was one of the few speakers during the convention to acknowledge the devastating impact of the pandemic, calling it a “time of testing” for the nation. Recasting Trump’s 2016 campaign slogan, he vowed that a second term would “make America great again, again”.

Pence spoke hours after a curfew was instituted in the Wisconsin suburb of Kenosha, where protests continued for a fourth night in response to the police shooting of Jacob Blake, a Black man, by a white police officer.

But the vice-president made no mention of Blake, whose lawyers have said he is paralyzed, nor did he address the arrest of a white 17-year-old, who was charged with homicide after two people were shot dead and another seriously wounded apparently in connection with the protests on Tuesday night.The teenager’s social media accounts suggest he was a supporter of law enforcement groups and Trump.

Instead, he forcefully condemned acts of arson and violence that have unfolded alongside peaceful demonstrations this summer.

“Let me be clear, the violence must stop, whether in Minneapolis, Portland or Kenosha,” he said. “We will have law and order on the streets of this country for every American of every race and creed and color.”

He continued with a full-throated endorsement of law enforcement: “Under President Trump, we will stand with those who stand on the thin blue line, and we’re not going to defund the police – not now, not ever.”

Yet as Pence spoke, solidarity with protesters and calls for police reform were once again sweeping the nation, spreading from the streets of Kenosha to the NBA bubble in Orlando, where the league postponed three playoff games after the Milwaukee Bucks refused to take the floor on Wednesday evening. Their refusal to play prompted teams and athletes across the country to join the boycott in a dramatic stand against racial injustice.

Trump and his political allies have used the occasion of this week’s convention to reinforce the image of Trump as a “law and order” president, who will protect Americans from rising crime (it is not rising) and violent demonstrations (protests have been overwhelmingly peaceful) that supposedly threaten to spread from urban centers to every corner of the country. Those appeals, potent in the 1960s, are increasingly out of step with modern public opinion.

Yet the intense focus on rioting and chaos during the convention, as opposed to the coronavirus pandemic, indicates that Republicans believe a “law-and-order” message is their best hope of capturing moderate, suburban voters who are uncomfortable with the president’s style.

How voters in Wisconsin respond to the unrest could determine whether the president is re-elected: the state is one of the most fiercely contested in this election and in 2016 Trump was the first Republican to carry Kenosha county in decades.

Earlier on Wednesday, Biden said he had spoken to the Blake family and promised that “justice must and will be done” while also condemning “needless violence”.

“The contrast tonight couldn’t be clearer: we can choose four more years of fear, division, and hate,” Biden said after Pence’s address. “Or we can choose a different path – one of hope, unity and light. Let’s overcome this era of darkness, together.”

As it did during the first two nights of the convention, the Republican convention’s program swerved between speakers who painted dire portraits of an America threatened by mob rule and those who sought to cast the Trump presidency as one that ushered in a new era of inclusion, racial equality and gender parity.

“It took 244 years to build this great nation, flaws and all, but we stand to lose it in a tiny fraction of that time if we continue down the path taken by Democrats and their radical supporters,” said the South Dakota governor, Kristi Noem, whose remarks were taped before the unrest in Kenosha. “From Seattle and Portland to Washington and New York, Democrat-run cities across this country are being overrun by violent mobs. The violence is rampant. There’s looting, chaos, destruction and murder.”

“I want my daughter to grow up in President Donald Trump’s America,” McEnany said, after describing a thoughtful call she received from the president following a preventive mastectomy in 2018. His concern, she asserted, was a testament to Trump’s commitment to protecting Americans with pre-existing conditions, even though he has actively worked to repeal the Affordable Care Act, which protects millions of people with such conditions.

Jack Brewer, a former football player and a member of Black Voices for Trump, sought to soften one of the most controversial episodes of his presidency: Trump’s response to the white supremacist rally in Charlottesville.

“Are you going to allow the media to lie to you, by falsely claiming that he said there were ‘very fine’ white supremacists in Charlottesville?” Brewer said. “He didn’t say that! It’s a lie!”

But the reality is more complicated. In statements after the white nationalist violence, Trump equivocated and claimed “both sides” were at fault even as he condemned their racism.

It is uncertain if the character references are enough to overcome opinions shaped after nearly four years of incendiary policies that include separating thousands of migrant children from their parents.

Pence extolled the president’s handling of the coronavirus pandemic, which he cast as a success even as the death toll neared 180,000. He called the US a “nation of miracles” and suggested a vaccine could be available within months.

When he finished his remarks, he was joined by Trump and the first lady, Melania Trump, who descended from the stage to shake hands along a rope line with supporters. Neither couple – nor members of the audience – wore a mask.