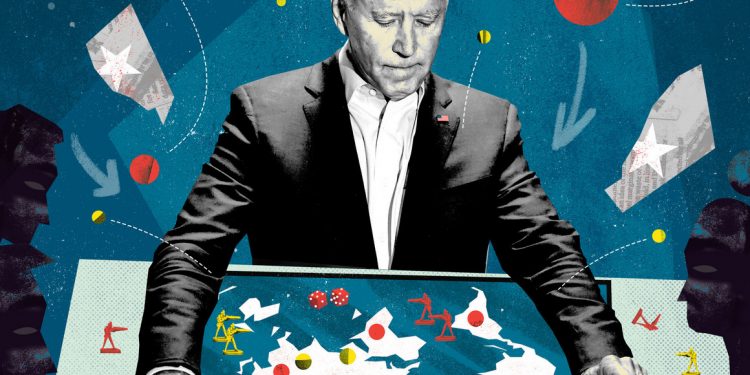 Paris (Brussels Morning) Joe Biden was pronounced the winner of the US presidential election the afternoon of Saturday 7 November, after four days of intensive reporting, live updates and multiple analyses of the tally that gripped large audiences worldwide.

The US election was widely covered and commented on throughout the Middle East, where the debate centred on how the new administration might affect the balance of power in the region on a number of issues, most notably the Iran deal, relations between Israel and its Arab neighbours, as well as the armed conflicts both Syria and Yemen.

The incoming US administration will take over amidst a rapidly worsening pandemic and a related economic crisis, and is thought likely to attempt to de-escalate tensions in conflict areas.

While leaders in the Middle East reflected on how to react to the outcome and President Donald Trump’s rejection of it, experts and observers alike discuss the awkward position many leaders found themselves in: how to congratulate President-elect Biden while avoiding the wrath and possible retribution of President Trump. “No one wants to mess with a furious Trump in the final weeks of his presidency”, Al-Monitor pointed out in its analysis.

Restoring alliances with European states in the context of a multilateral approach to global affairs is seen as being much easier than a reassessment of Washington’s relations in the Middle East. There, Netanyahu, MBS and Erdogan figure among leaders that the Financial Times called “losers” following the Biden win, while Hassan Rouhani is seen on the winning side.

Saudi Arabia’s King Salman and Crown Prince Mohammed Bin Salman were late to congratulate Biden on the election outcome — perhaps understandably, considering that the kingdom’s rulers are aware that relations with the new administration will be nowhere near as close as those they had enjoyed with the Trump “tribe”.

The Saudi Press Agency reported on Sunday night that the king and crown prince had congratulated Biden on his victory, reiterating the historically close relationship between the two countries. MBS, as the crown prince is commonly referred to, stands to lose the special and often informal relationship he had formed with President Trump and son-in-law Jared Kushner, which was built largely upon their shared hostility towards Iran.

This special bond was not upset even at moments where Saudi Arabia’s international image suffered widespread setbacks in recent years.

President Trump put considerable effort into blocking Congress from limiting arms sales to the kingdom over its alleged humanitarian crimes in Yemen, and he refrained from accusing MBS of direct implication in the murder of Jamal Khashoggi in 2018 – even though a UN independent committee plus intelligence agencies, the CIA included, had concluded that this was the case.

Trump even briefly supported the Saudi-led embargo against Qatar in 2017, despite the Gulf emirate hosting the largest US airbase in the Middle East. However, once the presidential transition is completed Saudi Arabia “won’t be Washington’s darling any longer”, according to Foreign Policy magazine.

Biden has repeatedly called on Saudi Arabia to improve its human rights record and during his campaign promised to “re-evaluate” relations with the kingdom, to make sure that the US “does not renege on its values to sell weapons or buy oil”, L’Orient – Le Jour reported.

Al-Monitor predicts a difficult way ahead for Israel’s Prime Minister Benjamin Netanyahu who relied greatly on the Trump team’s support for his policies both towards the Palestinians and the normalisation of ties with the United Arab Emirates and Bahrain earlier this year.

The “deal of the century” as the US team termed it, is set to permanently kill the two-state solution and is seen as a green light for Tel Aviv’s annexation of parts of the West Bank. This is in clear violation of international law and US obligations stemming from its approval of UN resolutions, observed Marwan Muasher in Diwan.

In contrast, Biden is unlikely to be willing to let Israel go ahead with further deals without asking for much in return. An anonymous Israeli diplomatic source quoted by Al-Monitor regrets that there’s no close cooperation between the Israeli government and the incoming US administration yet, a possiible explanation for Netanyahu’s slowness to issue a congratulatory tweet.

An issue where the Trump administration and Israel could still put a break on Biden’s policy plans concerns sanctions against Iran, where a set of new measures are in the pipeline, relating to humanitarian and terrorism questions.

Were these sanctions to pass, the Biden administration would find it difficult to argue for a reversal, according to Al-Monitor. However, that also depends on the final setup of the US Senate and the dynamics of the Democratic presidential administration.

As for Iran, Karim Sadjadpour of the Carnegie Endowment maintains that Biden has always taken a realistic line and therefore most likely will diverge from Trump’s aggressive policy of sanctions and maximum pressure.

Returning to the Joint Comprehensive Plan of Action, known as the “Iran Deal”, may not be one of the new administration’s immediate foreign policy steps.  There are, however, some options to consider, depending on Iran’s stance from now on.

Another regional leader who stands to lose his privileged relationship with the US President is Egypt’s President Abd-al-Fattah al-Sissi, sometimes referred to as Donald Trump’s “favourite dictator”. Sisi had the backing of Trump against the protests which erupted in Cairo in 2019, as well as in foreign policy moves in the Libyan conflict and with regard to Egypt’s tense relations with Ethiopia.

Nonetheless, he was among the first to congratulate Biden on his victory. As Courrier International notes, Sisi’s regime may face a more demanding US policy on issues to do with human rights and internal repression, which have intensified in recent years.

Turkey’s President Recep Tayip Erdogan took all of three days before sending a congratulatory message to Joe Biden and Kamala Harris. He is another who has reason to be anxious, as he will no longer be able to influence US foreign policy with a simple phone call, as Middle East Institute analyst Gonul Tol has noted.

Relations between Turkey and the US soured during the Obama years but were restored thanks to the personal bond between Trump and Erdogan.

But Erdogan and Biden have indirectly exchanged some bitter words, and Ankara is apprehensive about the new administration’s willingness to put pressure on a list of geopolitical issues, such as Nagorno-Karabakh, the Eastern Mediterranean and the northern Syria front. Under a Biden administration, relations between Washington and Ankara will undoubtedly start from a position of mutual tension and suspicion.

As for the Syrian conflict, analysts agree with what is described as“four lost years under Trump” according to Karim Sanjadpour. US inaction and inconsistency at times allowed Iran, Turkey, Russia and Syria’s President Bashar al-Assad to strengthen their hold of the country.

Under the Democrats there will be greater willingness to reassert US interests and advance humanitarian assistance and a solution to the precarious situation of millions of refugees. Here too, the new policy will also depend on Iran’s position. However, as Syria expert Christopher Philips notes in Middle East Eye, Biden was sceptical of further US involvement in Syria under Obama and is unlikely to make it central in his quest to rebuild US reputation.

There may have been a decline in overall US interest in the Middle East, as many experts maintain, and some leaders will lose the privileged relations they enjoyed under Trump. Nonetheless, However, in order to provide realistic solutions to regional conflicts, a degree of multilateral cooperation with regional powers will still be required.