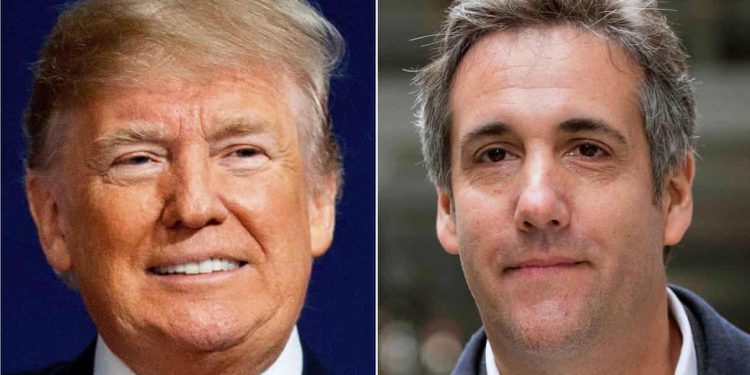 Michael Cohen’s tell-all memoir makes the case that president Donald Trump is “guilty of the same crimes” that landed his former fixer in federal prison, offering a blow-by-blow account of Trump’s alleged role in a hush money scandal that once overshadowed his presidency.

It also alleges that Trump made numerous racist remarks, according to the Washington Post, including saying that Barack Obama only got into Columbia University and Harvard Law School because of “fucking affirmative action”. Trump had “hatred and contempt” for Obama, the book says.

Trump began his political career by promoting the “birther” conspiracy theory that falsely claimed Obama was not born in the US. CNN also reports that Cohen’s book claims that before he became president “Trump hired a ‘Faux-Bama’ to participate in a video in which Trump ‘ritualistically belittled the first black president and then fired him’.” CNN included a picture it said was from the book of Trump in an office facing a black man across a desk.

According to the Post, Cohen alleges that the US president has a “low opinion of all black folks”.

Trump said: “Tell me one country run by a black person that isn’t a shithole. They are all complete fucking toilets,” Cohen claims, and praised apartheid-era South Africa, saying: “Mandela fucked the whole country up. Now it’s a shithole. Fuck Mandela. He was no leader.”

Of all the crises Cohen confronted working for Trump, none proved as vexing as the adult film actor Stormy Daniels and her claims of an extramarital affair with Trump, Cohen writes in Disloyal: The True Story of the Former Personal Attorney to President Donald J Trump.

Trump, despite his later protestations, green-lighted the $130,000 payment to silence Daniels ahead of the 2016 election, reasoning he would “have to pay” his wife a far greater sum if the affair ever became known, Cohen writes, adding the president later reimbursed him with “fake legal fees”.

“He readily admits to lying routinely but expects people to believe him now so that he can make money from book sales,” White House spokesman Brian Morgenstern said in a statement. “It’s unfortunate that the media is exploiting this sad and desperate man to attack president Trump.”

The Associated Press obtained an early copy of the book, which is scheduled to be released on Tuesday.

Cohen writes that Trump’s three oldest children came to his office after Trump’s acerbic and racist campaign announcement in 2015, asking him to convince their father to drop out of the race because of the damage his rhetoric would do to the company.

“MC, you’ve got to get dad to stop the campaign. It’s killing the company,” Cohen quotes Ivanka as saying.

Cohen says Trump was undeterred and unconcerned with the harm to his businesses. “Plus, I will never get the Hispanic vote,” Trump said, according to Cohen. “Like the blacks, they’re too stupid to vote for Trump. They’re not my people.”

The Washington Post, which also said it had obtained a copy,

also reports that Cohen writes that Trump “inadvertently” made a crude sexual comment about Cohen’s 15-year-old daughter, saying: “Look at that piece of ass. I would love some of that.”

And, according to the Post, Cohen alleges that he and Trump watched a strip show which included simulated urination in Las Vegas in 2013.

On Russia, the Post reported that Cohen wrote Trump’s admiration of president Vladimir Putin was simply down to his love of money, saying he wrongly identified Putin as “the richest man in the world by a multiple”.

It reported: “Trump loved Putin, Cohen wrote, because the Russian leader had the ability “to take over an entire nation and run it like it was his personal company — like the Trump Organization, in fact.”

Cohen, who pleaded guilty to campaign finance violations and other crimes, including lying to Congress, calls himself the “star witness” of a hush-money conspiracy that still could culminate in charges for Trump after he leaves office. He described his new book as a “fundamental piece of evidence” of the president’s guilt.

Cohen’s allegations – his most detailed to date – are part of an unsparing and deeply personal put-down of Trump. Cohen assails Trump as an “organized crime don” and “master manipulator”, but allows that he saw much of himself in a man he once considered a father figure.

“I care for Donald Trump, even to this day,” Cohen writes, “and I had and still have a lot of affection for him.”

Cohen remains at a loss to explain his unswerving allegiance to a cut-throat businessman who abandoned him at the most vulnerable point in his life. He likens his fealty to Trump to a mental illness and said he thought of himself as acting like an alcoholic or drug user in need of an intervention.

“It seemed to them that I wouldn’t listen to anyone, not even the people who loved me most, as I gradually gave up control of my mind to Trump,” Cohen writes. “I confess I never really did understand why pleasing Trump meant so much to me,” Cohen adds. “To this day I don’t have the full answer.”

Cohen says in the book that he stayed loyal to Trump for so long, despite the dirty work and volatile personality, because he wanted to stay close to his celebrity and power. “I was the canary in the coal mine for the millions of Americans who are still mesmerized by the power of Trump,” Cohen writes.

The memoir offers an introspective – and at times self-loathing – apology for the role Cohen played in Trump’s political ascent. He urged Trump for years to run for president but now laments that his election “led the nation and maybe even the world to the brink of disaster”.

“I thought Trump was a visionary with a no-nonsense attitude and the charisma to attract all kinds of voters,” he writes. But the real reason he wanted Trump in the White House, Cohen concedes, “was because I wanted the power that he would bring to me”.

But Cohen expresses little to no remorse for his federal crimes, saying he was “railroaded” by the government and pleaded guilty after prosecutors threatened to indict his wife.

“I was in the grip of the conviction machine,” he writes. “I was the ham sandwich, and I had been indicted.”

Cohen has led a publicity blitz around his memoir even as he continues serving his federal sentence in home confinement. A federal judge ruled this summer that authorities had retaliated against him – sending him back to prison in upstate New York after he had been furloughed because of the coronavirus pandemic – for publishing the book ahead of the November election.

He was released to home confinement in July and the government lifted a ban on him speaking publicly.

“This story is all I have left for my wife, my children and the country I love so much,” Cohen writes.