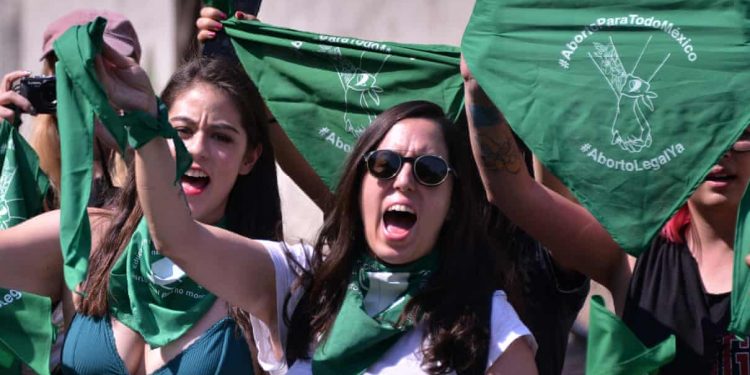 Activists on both sides of Mexico’s abortion debate are bracing for a potentially historic supreme court hearing on Wednesday which could lead to decriminalisation across the country.

The case before the five judges of the high court’s first bench involves an injunction granted in the eastern state of Veracruz, which ordered the local legislature to remove articles from its criminal code pertaining to abortion during the first 12 weeks of pregnancy.

Pro-choice campaigners say the court’s ruling could set a precedent which would enable further injunctions ordering other state legislatures to take action on abortion.

“This ruling could allow us to petition for injunctions or other measures in the rest of the states which have restrictive regulations on abortion,” said Rebeca Ramos, a lawyer and director of GIRE, a reproductive rights organisation in Mexico City.

Just two of Mexico’s 32 states have decriminalised abortion, and the high court’s decision comes as calls for decriminalisation mount across Latin America.

The region’s strong traditions of Catholicism and machismo have led to some of the most restrictive abortions laws in the world, but a growing feminist movement across the continent has demanded greater reproductive rights and action against femicide and other forms of gender violence.

Argentina’s government has promised to introduce legislation before the end of the year which would overturn the country’s blanket ban on terminations.

But Mexico’s self-described leftist president Andrés Manuel López Obrador has shown little interest in reproductive rights or broader women’s issues, arguing that corruption is a more pressing concern than abortion, and insinuating that the organizers of a historic women’s strike in March were part of a conspiracy against his government.

López Obrador’s Morena party controls the majority of Mexico’s state legislatures, but has been split on decriminalizing terminations – except in southern Oaxaca state, which scrapped its restrictions last September. (Mexico City and Oaxaca are the only states where abortion is no longer a crime.)

In 2008, the supreme court upheld Mexico City’s abortion legislation, ruling states had the right to set their own health policy. But more than half the country’s state governments subsequently enacted laws banning abortion in most or all circumstances.

Veracruz was among those states, enacting a constitutional amendment in 2016, declaring that life begins at conception. The state’s Catholic bishops and evangelical leaders – who had remained conspicuously quiet during a period of rampant political corruption and violence against women – actively promoted the ban.

“You still have a political class that’s in cahoots with the Catholic church,” said Maricruz Ocampo, an activist in Querétaro, who works with victims of sexual violence.

Mexico’s Catholic bishops have called for the faithful to rally ahead of the court decision on abortion and decried what they called a “culture of death.”

But observers say the supreme court has appeared supportive of abortion rights. In 2019, it upheld a rule allowing victims of sexual violence to terminate pregnancies – and also ruled in favour of women seeking abortion for health reasons.

Justice Juan Luis González Alcántara Carrancá wrote in a briefing which will be debated in the high court on Wednesday: “The total prohibition on interrupting a pregnancy – through criminal classification – is a barrier, which creates discrimination against women in relation to the right to health.”

Ramos described the supreme court’s previous decisions on abortion as “ambiguous”. But with the case in Veracruz, she said, “The court is getting to the heart of the matter and is now much more forceful in terms of indicating that abortion is a matter of human rights.”