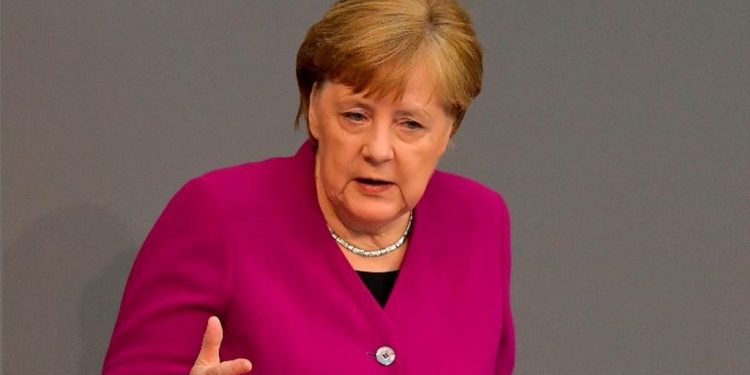 ANGELA MERKEL has been warned her own party members could soon rebel against her if changes are not made to her proposed ties with Russia on the controversial Nord Stream 2 gas pipeline.

Angela Merkel has been warned going ahead with the construction of the Nord Stream 2 gas pipeline could spark a rebellion among Christian Democratic Union (CDU) members. Former German Ambassador to the UK Thomas Matussek suggested CDU members have expressed concerns about the pipeline cementing Germany’s ties with Russia in the aftermath of the alleged poisoning of Vladimir Putin‘s main critic and other aggressive behaviour. Speaking to the BBC Today programme, Mr Matussek said: “The economic, the business interdependence used to be, and should be, a great stabiliser because both sides have a lot to win and a lot to lose.

“The pipeline is under severe pressure from the Trump Government, from members of the American Congress and, quite rightly, whether you like Putin or not, Germans have always said, ‘this is our business’.

“It makes defending the pipeline more and more difficult domestically because even in Angela Merkel’s party there are voices saying, ‘let’s stop the pipeline project. You can’t do business with these people.’

“I think it’s wrong but you need a little bit of understanding also from the other side to continue this trade relationship.”

Germany’s ties to Russia have come into question after Berlin moved President Putin’s critic Alexei Navalny to the country after he fell ill under unclear circumstances.

After days of tension between the two nations, Mr Navalny was air-lifted to Germany where doctors have now suggested he was “probably poisoned” as he travelled to hold a meeting in Siberia last week.

Public health officials have said the campaigner’s conditions are “serious but not life threatening.”

A spokesman for the hospital treating Mr Navalny said: “The exact substance is not yet known.

“Widespread analysis has begun. The effect of the poison – i.e. the inhibition of cholinesterase in the organism – has been proven several times and in independent laboratories.”

And earlier this month, US President Donald Trump and the US Congress warned Germany it would face a series of sanctions unless Chancellor Merkel agreed to drop the Nord Stream 2 gas pipeline project with Russia.

Chancellor Merkel has also been facing constant pressure from European partners as well to drop the pipeline over fears of growing Russian influence.

Analyst Erik Kirschbaum said: “Germany has been ignoring this for a long time. President Obama warned about this, Trump warned about it.

“Congress has been talking about this. It’s more than an economic project, Germany called it that but it’s obviously a political project.

“The West has had sanctions against Russia since the Ukraine problem in 2014 so it is a political issue.

“Germany can call it what it want but it’s not just Germany versus US, it’s also Ukraine versus Germany, a lot of Eastern European countries. Poland is upset about this, France was upset about this.”

He continued: “It’s basically a project to shaft the Ukraine and keep all the gas going away from Ukraine.

“Germany has just been ignoring the complaints and the noise out there for five or six years so it’s not surprise that is coming to a boil.

“This is an accident waiting to happen. Germany is making a mistake thinking it’s only Trump versus Germany and Trump may be gone.”