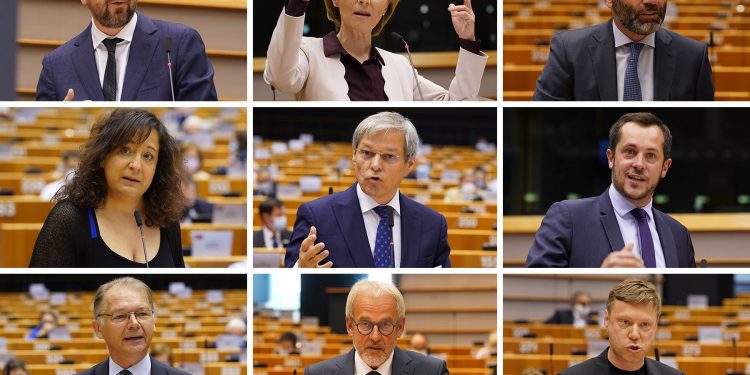 In an extraordinary plenary session, MEPs commented on the 17-21 July European Council deal on EU financing and the recovery plan to tackle the pandemic fallout.

In the debate with Council and Commission Presidents Charles Michel and Ursula von der Leyen, the deal reached at the recent European Council meeting on the recovery fund was qualified as “historic” by many MEPs as for the first time, member states have agreed to issue €750 billion of joint debt. With cuts made to the long-term budget (multiannual financial framework, MFF) however, most were “not happy”.

“We are not ready to swallow the MFF pill”, said Manfred Weber (EPP). Also, S&D leader Iratxe García would not accept the cuts, “not at a time when we need to strengthen our strategic autonomy and reduce disparities between Member states”.

Many highlighted that the question of reimbursing the debt was not resolved. MEPs insisted that the burden must not fall on the citizens, and that a robust system of new own resources including a digital tax or levies on carbon for the repayment must be guaranteed, with a binding calendar. Furthermore, many underlined that “the EU is not a cash machine for national budgets”, deploring that “frugal” countries do not want to pay the price for benefiting from the single market, and insisting that no funds should go to “pseudo-democratic” governments which do not respect the rule of law and EU values.

Others were more sceptical about new own resources generating enough to repay all the debt and warned that the crisis should not be used as a pretext for further EU integration. Most however stressed that Parliament is ready for swift negotiations to make the necessary improvements to the Council’s common position.

MEPs now vote on a resolution to wind up the debate, which will serve as a mandate for the upcoming negotiations with the German Presidency of the Council of the EU. The result of the final vote will be announced in plenary today at 17.30.