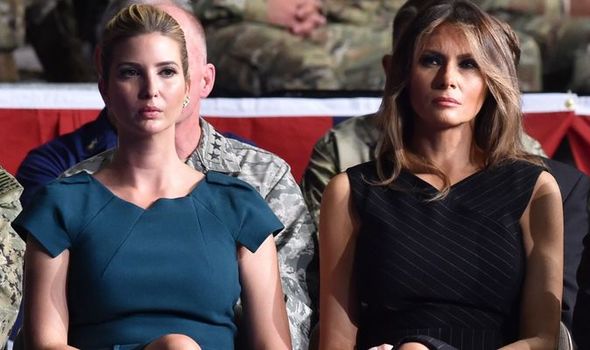 MELANIA TRUMP’s relationship with her step-children may be alienating the US First Lady in her own family, according to a Washington Correspondent who shared details about the Trumps’ “fascinating” bond.

Melania Trump‘s position in the Trump family has become “awkward’ as a result of her relationship with Ivanka and others, according to Henry Zeffman. The Times’ Washington Correspondent joined Times Radio to speak about the ongoing Republican National Convention and why the First Lady is being watched so closely. Mrs Trump featured prominently on the second night where she gave a live speech from the White House.

Mr Zeffman told listeners: “Melania and Donald’s relationship is a subject of continual fascination in Washington.

“She seems to not live in the White House, sometimes for months at a time.

“She seems to have spent most of July at the Trump golf club in New Jersey with Baron, their son.

“She also has quite a difficult relationship with the President’s first three children by his first wife, Ivana Trump.”

He continued: “Obviously two of them have big political roles: Donald Trump Jr was one of the main speakers on the first night of the convention.

“Lots of people think that he might want to run for President in four years time, whether his father loses against Joe Biden or not.

“Ivanka Trump is a key adviser as is her husband, Jared Kushner. Eric Trump has taken over the family business while Donald Trump is President.

“So where Melania sits in that, I think, is all-in-all a bit awkward.”

The journalist added: “But she certainly delivered a pretty compelling and quite elevated message for her husband’s campaign.”

Mr Zeffman also gave insight into the content and impact of the First Lady’s address.

She also made a plea for racial unity and urged citizens to stop making assumptions based on race.

Mr Zeffman told Times Radio: “We’re told that Melania Trump didn’t run her speech by her husband or any of his advisers before giving it.

“It was very much crafted and delivered by her and her small team of advisers in a bubble from the planning of the rest of the convention.

“As it was being aired, the American broadcasters mostly had her in split screen with Donald Trump in the audience.

“He did look a little bit nervous at the start at least and I suppose that’s because he didn’t know what his wife was going to say.”