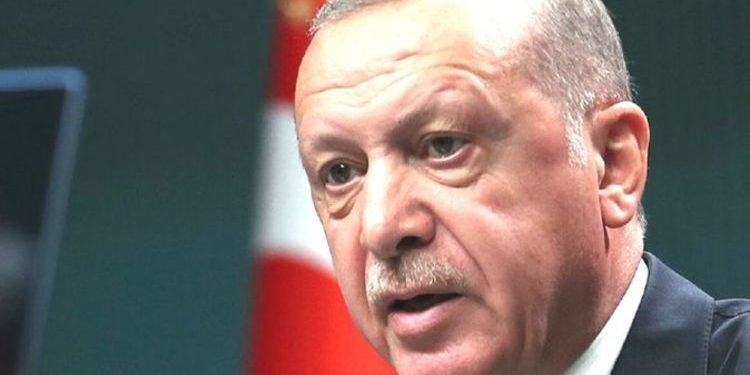 TURKEY and Greece are planning rival military exercises in the water between Cyprus and Greece in the eastern Mediterranean dispute threatens to boil over – with Turkish President Recep Tayyip Erdogan warning he was not prepared to take “even a small step back”.

The NATO allies have been at loggerheads ever since Turkish President Recep Tayyip Erdogan sent the Oruc Reis research vessel, surrounded by Turkish naval frigates, to seas close to the Greek island of Kastellorizo to undertake a seismic survey. Initially the mission was due to end on Sunday, but Turkey sent out a navtex, or naval alertm confirming the ship, along with two supply vessels, would stay in the area as part of a process to prepare for oil exploration.

Greek Government spokesman Stelios Petras said: “Greece is responding calmly and with readiness both on a diplomatic and on an operational level.

“And with national confidence it does everything needed to defend its sovereign rights.”

Turkish president Recep Tayyip Erdogan said: “Greece does not have the right to declare a ‘navtex’ in the region.”

In an indication that his nation will likewise persist with military operations in the area, Mr Erdogan added: “Turkey will not take even the smallest step back from the activities of either the Oruc Reis or our naval elements escorting it.”

To complicate matters further, European nations have offered contrasting responses in the face of the escalating crisis.

Germany’s foreign minister, Heiko Maas, is visiting both Athens and Ankara in a bid to ease the tensions, with Chancellor Angela Merkel having spoken to both Mr Erdogan and Greek Prime Minister, Kyriakos Mitsotakis, on a number of occasions.

France is urging the EU to condemn Turkey and impose economic sanctions.

Mr Verhofstadt, the European Parliament’s Brexit representative, tweeted: “Right, not military might, can solve the dispute in the Mediterranean.

“The EU must firmly support Greece to deflate tensions and bring this case asap to the International Court of Justice in The Hague.”

However, speaking on Friday Dr Alex Kazamias, a Senior Lecturer in Politics at Coventry University, was uncomfortable at Mr Macron’s approach.

However, speaking on Friday Dr Alex Kazamias, a Senior Lecturer in Politics at Coventry University, was uncomfortable at Mr Macron’s approach.

He said: “It is unwise in such a situation to send more warships to the region.

“France’s reactions can fuel more tension instead of containing it.

EU foreign ministers are due to discuss the issue in Berlin on Thursday and Friday.

On September 24 and 25, there will be a special EU summit at which tensions in the eastern Mediterranean will be discussed.

Kastellorizo is a one of many Greek islands in the Mediterranean – but is located barely a mile from the Turkish mainland.