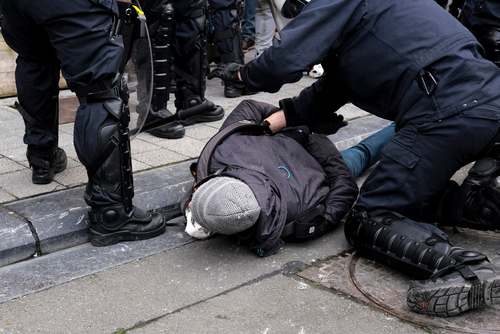 Belgian Police officers arrest protestors during an unauthorized demonstration against measures taken in order to stem the spread of the Covid-19 pandemic in Brussels, Belgium on January 31, 2021.

Belgium, (Brussels Morning Newspaper) A total of fifteen people were injured during the corona demonstration that took place on Sunday in the Cinquantenaire Park. Among them is also a resident of Woluwe-Saint-Lambert, who had nothing to do with the manifestation and was severely beaten by the police. “There is an internal investigation underway,” the police confirmed to the editors of BRUZZ. The man is filing a complaint.

Images circulating on social media show a man being severely beaten. And that while he wanted to help his girlfriend out of need. She had just gone shopping, but when she returned from the store, the street was taken over by amok makers. In a panic, she called her boyfriend, who is now filing a complaint against the police.

It went wrong immediately after the man left his home, he had it recorded with RTL. “Four officers attacked me, two-beat me up with their matrak,” he explains. “I tried to explain the situation, but they wouldn’t listen. I got punched in the face and on my body, they also used their fists. I tried to shield myself as much as possible, but they just wanted me to turn to them.”

The man lay bleeding on the ground and eventually had to go along in the combi and was taken to the barracks of Etterbeek, where he ended up in a cell with twenty troublemakers. “Here too I tried to explain that there was a misunderstanding. All I was told was to shut up.”

In the meantime, the man had lost a lot of blood, he felt unwell. “I asked for medical attention, luckily there was one ‘friendly officer’ who referred me to the hospital. There I had the stitches done on the head. In addition to bruises, I also had pain in my ear, my back, and my knees.”

The images are now being shared enthusiastically on social media. “I want those officers in question to be punished,” says the victim. Ilse Van de keere, spokeswoman for the Brussels-Capital-Ixelles police zone, confirms to the editors that an internal investigation is ongoing.

The mayor of Woluwe, Olivier Maingain (Défi), has also ordered an investigation into the incident.