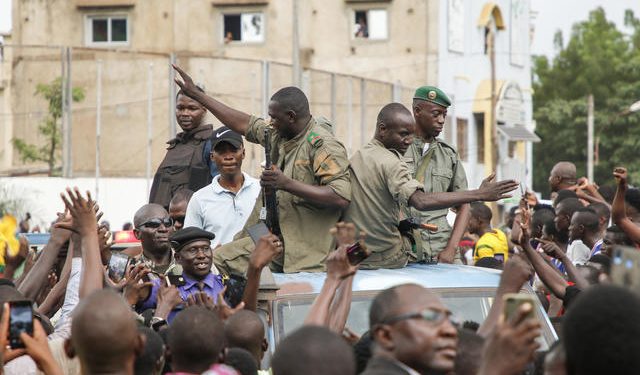 Mali’s new military rulers have come under intense pressure to ensure a rapid restoration of democracy following the coup that brought them to power overnight.

There were reports on Wednesday that the officers who led the coup met Mahmoud Dicko, a conservative cleric with a large popular following and de facto leader of the recent protest movement in Mali, during the afternoon, suggesting they may be seeking to work with political actors in the unstable west African country.

The US has condemned “a forcible seizure of power” and called on the military to reject violence and work towards a swift return of constitutional government while Cyril Ramaphosa, South African president and chair of the African Union, urged an immediate return to civilian rule.

In their only public statement – a short televised announcement on Wednesday morning – the leaders of the coup promised “a civilian political transition” that would lead to a general election after a “reasonable time” and said they were “not interested in power but in the health of the nation”.

In the name of the National Committee for the Wellbeing of the People, Col Maj Ismaël Wagué promised polls to “give Mali strong institutions capable of better managing our everyday lives and restoring confidence between the governed and the governors”.

The intervention on national media came at the end of a fast-moving and chaotic day, which had started with reports of a minor mutiny and ended with the deposition of the president, Ibrahim Boubacar Keïta. At about midnight, Keïta, whose second term in office had a further three years to run, announced his resignation, as well as the dissolution of the government and the national assembly.

Keïta’s departure was met with jubilation by anti-government demonstrators in Bamako, the capital. “All the Malian people are tired; we have had enough,” one said.

The UN security council has scheduled a closed meeting for Wednesday to discuss the situation in Mali, where it has deployed one of its biggest and most expensive peacekeeping missions.

The EU described the mutiny as an attempted coup and warned it could destabilise the whole region. The UN secretary general, António Guterres, called for “the immediate restoration of constitutional order and rule of law”.

On Wednesday, China said it opposed regime change by force.

Regional African powers closed borders with Mali, suspended its membership of the decision-making bodies of the Economic Community of West African States, and condemned the the “putschists and their partners”.

However, the military officers who led the takeover appeared keen to reassure international and domestic opinion, announcing they would respect a key peace deal that it was hoped would bring stability to Mali, and maintain partnerships with UN peacekeepers and the large French military force stationed in the country.

The unrest began in the garrison town of Kati, about nine miles (15km) outside Bamako, where gunfire broke out as soldiers detained senior officers. The reports of violence at the base prompted fears of a replay of a 2012 mutiny that led to a coup d’etat, which opened the way for Islamic extremists and ethnic separatists to exploit the chaos by seizing swaths of territory in the north of the country.

Initially neitherthe scale of the mutiny nor the aim of its leaders were immediately clear. But by late afternoon, the president had been driven in a military convoy to Kati and was preparing his resignation statement. In the centre of Bamako, soldiers were feted by a jubilant crowd. The city appeared calm on Wednesday morning.

Keïta came to power in 2013 and won a second term as president in 2018. But there has been rising anger at government incompetence, endemic corruption and a deteriorating economy.

Protesters took to the streets last month when the constitutional court overturned the provisional results of a parliamentary election held in March and April after Keïta’s party had performed poorly. Up to 14 were killed when police opened fire on demonstrators.

Keita’s opponents accused his government of cronyism, pointing to the influence of his son Karim Keita, who stepped down from the powerful position of chairman of parliament’s defence and security committee in July. The government denied the accusations. An economic slump exacerbated the crisis and though the president made concessions to opponents, leaders of the growing protests rejected proposals to join a power-sharing government.

An opposition politician in Bamako said Tuesday’s events had come as a surprise to him and his colleagues. “This is not some kind of thing organised with us,” he said.

There are widespread concerns that any instability will benefit extremists in Mali affiliated with al-Qaida and Islamic State. The insurgents have proved tenacious, growing in strength across the Sahel region despite the intervention of thousands of French forces, teams of US special forces, regional armies and the UN peacekeepers.

Ryan Cummings, a South Africa-based analyst, said the coup had been more peaceful and orderly than that of 2012. “There is no immediate threat of Islamists exploiting a security vacuum as in 2012 but the bigger concern is policy inertia,” he said.

“The military is going to want a bigger stake in government, some kind of new settlement will have to be worked out. They will probably need elections but how do you organise polls when you have got Covid-19 and ethnoreligious violence has reached a point where you cannot guarantee security for voters in two-thirds of the country?”

The upheaval has prompted fresh criticism of the strategy of western and other powers in Mali, which many observers have said has been overly focused on the fight against insurgents to the detriment of politics.

“In Mali, security interests have overwhelmed the governance needs of the country. Both are required in Mali, but true security will be realised only when the governance deficits are addressed. Sustainable security and peace derive from good and inclusive governance,” said Monde Muyangwa, the director of the Africa programme at the Wilson Center in Washington DC.

Klaus Spreyermann, of the International Committee of the Red Cross in Mali, said the coup had followed years of conflict and violence in the wider Sahel region and called for humanitarian assistance to continue.

“Violence has tragically escalated during the Covid-19 pandemic, driving death, injury and displacement … People in northern and central Mali have lived for years in a vicious cycle of conflict and climate shocks that have driven them from their homes and destroyed their livelihoods. Their needs must not be forgotten, no matter the changes of leadership in Bamako,” Spreyermann said.

The coup is a significant setback to French diplomacy in the region, though some officials may welcome the departure of Keïta, who was seen as ineffectual.

Mali is regarded as a linchpin of European efforts to secure the Sahel to counter the problems of terrorism and illegal migration, and Paris has invested heavily there, despite the increasing costs and domestic unpopularity of its military commitment.