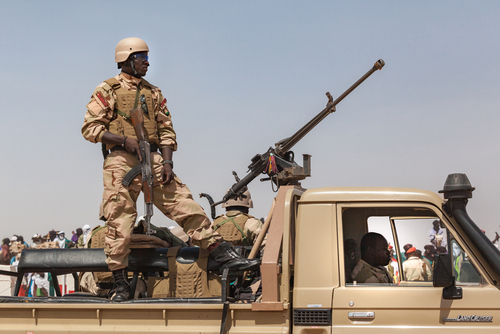 Paris (Brussels Morning) Colonel Assimi Goïta, who emerges as the uncontested strongman of Mali, was sworn in as interim president after leading two military coups and overthrowing two presidents within nine months. Choguel Kokalla Maiga, leader of the civilian opposition and former minister, was later appointed prime minister according to a decree read on state television.

But the true intentions of the military are yet to be discovered, while the Sahel region sees instability and jihadist attacks on the rise, as well as France and Russia vying for influence over the future of this country once heralded as a “poster child for democracy” in Africa.

“Mali will honour all of its commitments”

In his opening speech after the inauguration ceremony, Goïta said he would oversee the transitional period toward democratic elections scheduled for 27 February 2022.

“I would like to reassure the sub-regional and regional organisations and the international community in general that Mali will honour all of its commitments for and in the best interests of the nation”, Goïta said after his investiture and expressed his desire to organise “credible, fair, transparent elections within the scheduled deadlines”.

“The new situation offers us the opportunity to put back the transition process in the direction desired by the people. The challenges are immense, the legitimate expectations of the people are also great” he added, insisting on his “historic responsibility” to preserve the republican regime and the democratic gains, to guarantee national unity, independence and the integrity of the national territory.

Sticking to the calendar set after the coup that overthrew President Ibrahim Boubacar Keita in August 2020 under the scrutiny of international partners is the biggest challenge Goïta faces.

A transitional government that would oversee an 18-month transition to democratic elections was then put in place with Bah N’Daw as interim president and Goïta as vice president. On 25 May, Goïta ordered the arrests of N’Daw and Prime Minister Moctar Ouane for not informing him about the details of a cabinet reshuffle, which he alleged violated the transitional charter, Reuters reported. They were released hours later after submitting their resignations. The 38-year old special forces commander was subsequently declared president by the Constitutional Court in late May.

The appointment as prime minister of Choguel Kokalla Maiga, president of the strategy committee of the M5 opposition movement (Mouvement du 5 juin), is seen as an attempt to reconcile the movement with the junta, which it accused of completely sidelining the civilian role during the transition period under N’Daw. It also adds an appearance of inclusiveness to Goïta’s posture, crucial in gaining support internally, and addresses the conditions set by the ECOWAS and the international community after the condemnation of his power grab.

“The existing commitments must be implemented in the exclusive interest of Mali”, repeated Maïga, who advocated “realism and pragmatism” and asked for the international community’s understanding. “The invectives, sanctions, threats will only complicate the situation” he added, while paying tribute to the French soldiers killed in Mali. “We have to tell our friends: our people need to hold their hand”.

Sanctions a minima as jihadist violence surges in Sahel

Regional and international organisations and governments announced sanctions against the Malian military but stopped short of imposing stricter measures. The African Union and regional cooperation body ECOWAS suspended Mali’s membership but announced no further measures or the closing f other borders. Instead, ECOWAS sent its transitional envoy, former Nigerian president Goodluck Jonathan, for consultations in Bamako, while the World Bank also said it had temporarily paused payments to the country.

International partnerships are crucial for Mali, one of the poorest and lowest-ranked countries on the UN’s Human Development Index today, the Financial Times notes, prompting Goita and Maiga’s insistence that they will adhere to the international commitments and the transitional process.

Last week France suspended its joint operations with the Malian military and called for the immediate restoring of the democratic process. Dismissing a “coup d’Etat within a coup d’Etat”,  President Macron warned that he’d withdraw the French troops stationed in Bamako in the context of the Barkhane operation should the country turn towards dialogue with radical Islamists, a common tactic in the Sahel but a red line for France.

“Radical Islamism in Mali with our soldiers there? Never”, he told the Journal du Dimanche, reminding the conditions of the French engagement in the country, namely a democratic transitional process and the exclusion of any “pact” with radical Islamist or armed factions. The French presidency later clarified that Barkhane operations would continue independently. Although these measures have not yet been lifted, a complete withdrawal of the French troops is highly unlikely, especially at a time when jihadist violence is increasing in the wider Sahel region.

In recent days, more than 160 people were killed in a jihadist attack against the village of Solhan in Burkina Faso. Such attacks have multiplied in nearly all the Sahel states, in retaliation to the central authorities’ crackdown against jihadism and as a means to prevent civilians from joining as volunteers to support the national armies, political scientist Doudou Sidibe told France24.

The G5 Sahel cooperation framework remains weak as it lacks international funding and support in order to carry out its tasks, making it dependent on the French-led Barkhane and the UN Minusma operations. Political crises, such as the Chadian change of leadership following Idris Deby’s death, could further embolden extremists to push for territorial gains and impose their control in remote areas.

Observers also point out the increasing clashes between jihadist groups vying for control in the Sahel. Boko Haram’s notorious leader Abubakar Shekau, “global terrorist” according to the US, was reportedly killed in May, by detonating explosives on himself after a battle against the Islamic State West Africa Province (Iswap) group, the BBC reported. According to an audio released by the rival group, Shekau was tracked down and killed by orders of the Islamic State (IS) caliph al-Hashimi. Apart from the evident escalation of intra-jihadist rivalries, this puts into embarrassment several Western and local intelligence operations who have chased Shekau for years.

The complicated situation on the ground thus allows little space for realistically considering a French withdrawal from the Sahel. Thierry Vircoulon, a researcher at the French Institute for International Relations (IFRI) maintains that an eventual retreat would have severe  consequences; symbolically, because it would allow radical groups to claim victory over the powerful French and Western armies and practically, as the reasons behind the French intervention are still there – jihadist and secessionist radical groups, endemic poverty and corruption, as well as every possible sort of trafficking.

On a wider geopolitical perspective, the French strategy also faces the increasing Russian influence in the Sahel which could challenge France’s pivotal security and political role. In Mali, writes Boubacar Haidara in The Conversation, this could play out in the dynamics of the new government, as a confrontation between two divergent points of view. One that remains close to the French vested interests in the country, represented by the deposed president and prime minister; and one that promotes a rapprochement with Russia, represented by certain officers and the Prime Minister Maïga who was educated in Belarus and Russia, according to Le Monde.

This potential pro-Russian current is actually traced in several central African states through existing links and networks, mainly by means of military education and weapons and arms procurement. These links are activated through proxies, such as private military companies of the Wagner type or could be made more direct through direct links with officers of the military establishment. In his remarks to France Culture, Vircoulon refrains from any conspiracy theory of a Russian role in the second coup in Mali, but notes the recent protests in front of the Russian embassy in Bamako as an indication that the Sahel could be the next terrain of a Franco-Russian rivalry.