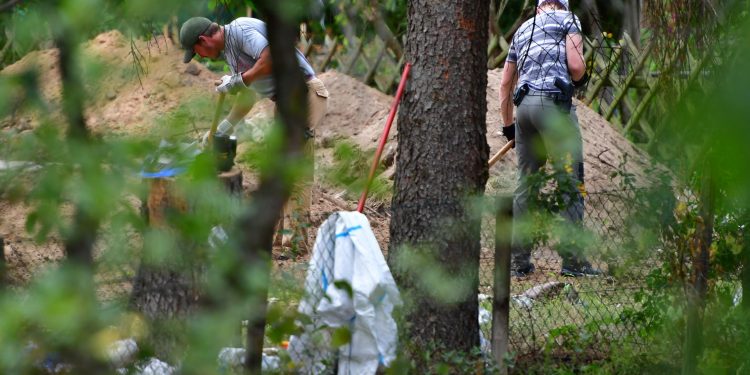 German police are searching an allotment plot on the outskirts of the northern city of Hanover in connection with their investigation of a suspect in the disappearance of Madeleine McCann.

A small excavator is being used to clear the plot and police officers are combing the ground with rakes and shovels, according to footage shown on German media.

The police have not revealed what exactly they are hoping to find. But a spokeswoman for state prosecutors in Braunschweig confirmed that the search was taking place as part of its investigation into the disappearance of three-year-old Madeleine in Portugal in 2007.

“The operation is occurring in conjunction with our investigation into murder by the 43-year-old suspect,” she told German media.

Braunschweig’s state prosecutor’s office has repeatedly said it has concrete evidence that Christian Brückner – a German man who was living in Praia da Luz when Madeleine was staying in the Algarve town with her family – was involved in her disappearance. It has also said it believes the British girl is dead but has so far declined to give more details.

One resident of Hanover said up to 100 officers had been present at the allotment. Forensics officers in white suits and accompanied by sniffer dogs were also reportedly on the scene.

The allotment lies in the rural region between Hanover Ahlem and Seelze-Letter, and is around 40 miles from Braunschweig, where Brückner was last registered as living. It is flanked by a small house and shed which Brückner is believed to have lived in.

The operation began at dawn on Monday and is due to continue into Wednesday, according to the Hannoversche Allgemeine Zeitung newspaper, which broke the news.

Earlier this month Portuguese police and divers searched three wells in the area of Vila do Bispo, on the Algarve, according to local media, but police said no evidence was found.

Brückner, who is serving a prison sentence in the city of Kiel for drug trafficking, was named as a main suspect in the disappearance last month. He spent several years living in the Algarve. He has two previous convictions for sexual contact with girls, one for rape, as well as other convictions for theft and fraud.